Welcome to the November Accucraft UK update.  As we settle into our new premises (and very nice they are too!) we’d like to take the opportunity to review the status of some current projects.   We have also taken delivery of the last of the Adams Radial Tanks and expect these to be sold out in the New Year when their matching bogie coaches will be delivered.  Due for completion during December are the first hundred Quarry Hunslets and these should arrive in January with the 1:32 RMB coaches.  Good progress has been made on the 1:32 scale GWR 43XX Mogul and production of these should commence once the Quarry Hunslets have been delivered.

This year marks the centenary of the repatriation of the body of the unknown warrior and the conveyance of the coffin to London by rail.  The arrival of November reminds us that we will soon, once again, be paying our respects to those who fell in conflict, particularly the many railwaymen who volunteered for service in both World Wars.  However, it was not just men who served, a great many British locomotives also found their way abroad and our forthcoming Great Western Railway 43XX 2-6-0 represents a class “which also served”.  To commemorate this we will be producing versions carrying the livery of the Railway Operating Division, or ‘ROD’, indeed preserved example, No. 5322, was one of those to see action in Northern France during WW1.  You can find full details of these attractive locomotives here.

We will be delivering the first examples of these lovely locomotives this month and the factory has sent us some images of the first one to be finished in TR black livery.  You can find full details of the model here.

Through the good offices of Dave Mees in North Wales we were able to put the sample locomotive through its paces in ‘real’ operating conditions.  The delightful little locomotive showed that it was both biddable and strong, hauling as many wagons as the prototype might have been expected to handle and promising much more.  Here is a short clip of the locomotive in action.  Due for delivery in January, you can find further information here.

Our friend in Germany, Lorenz Schug, has taken delivery of a further batch of these locomotives in a range of new liveries for those might have preferred something other than black!  Available through Accucraft UK with a RRP of £1995.00, please contact us if you are interested. 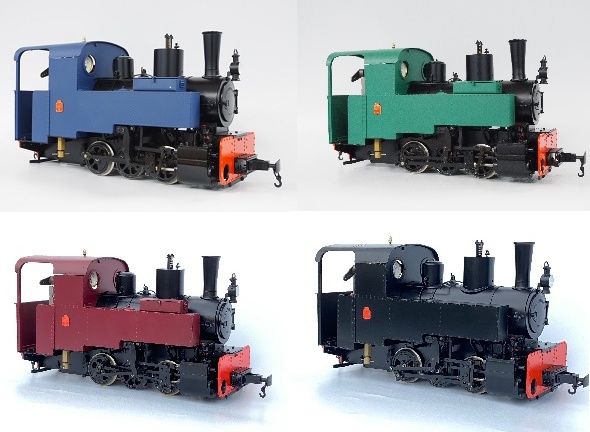