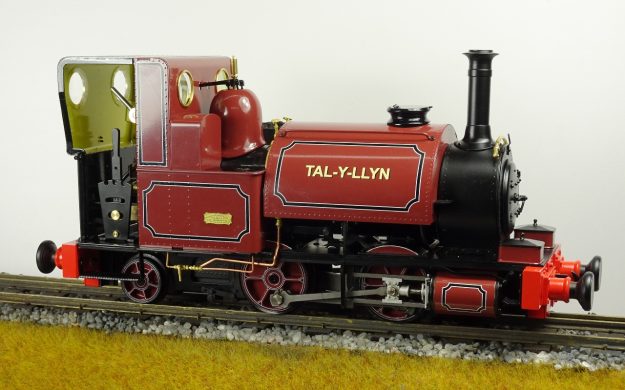 In 2013 we were approached to produce all the Talyllyn Railway locomotives as a commission and although this never came to fruition we had worked up the concepts and designs with a view to producing them of our own accord.  Due to developments within the trade we have decided that, rather than waste all this effort, we would bring the first of these, Dolgoch, to the market in 2019.  Now this has been delivered we turned to TR No. 1, Talyllyn, delivering the model in late 2020.

The Talyllyn Railway ordered two locomotives for its opening, Talyllyn and Dolgoch. Both were built by Fletcher, Jennings & Co. of Whitehaven, although to two very different designs. Talyllyn was the first order the company had delivered to north Wales was built to the company’s C Class design, although it was the first member of its class to be built to a gauge less than 2′ 8″.  The locomotive was originally delivered as a 0-4-0ST with an open cab. The wheel arrangement gave an unacceptable ride and Talyllyn was returned to its manufacturer for the fitting of a pair of trailing wheels, converting it into an 0-4-2ST. One unusual feature of the conversion of Talyllyn to an 0-4-2 wheel arrangement was that the trailing axle was fixed rigidly to the frame, resulting in an overall wheelbase of 8′.  A cab was subsequently fitted in the railway’s workshops at Pendre.

The locomotive was returned to Fletcher Jennings for a second time around 1900, although the reason for this visit is not recorded. Repairs and improvements were also made at Pendre over the years, including alterations to the cab, fitting of a footplate at the front of locomotive and of a sandbox. A new set of frames supplied by W.G. Bagnall’s was also fitted at Pendre, again around 1900.

Talyllyn remained in service for most of the life of the original railway. By the time of the Second World War it had fallen into a very poor state of repair, as it was the more popular of the two locomotives and had been used more frequently. It was finally retired in 1945 when its boiler and firebox were found to be beyond use or further repair. At this time the locomotive was still carrying its original 1864 boiler.  Following the rescue of the Talyllyn Railway in 1951, Talyllyn was inspected and found to be beyond economic repair. However, as the railway’s fortunes improved it became possible to consider a major overhaul. In 1957 the locomotive was sent away to the Gibbons Brother’s Brierly Hill engineering works for complete renewal. A new boiler, saddletank and bunker were built and Talyllyn returned to service in 1958.

The model is built to a scale of 16mm:1′ (1:19 scale) and follows our standard design brief being internally gas-fired with a centre flue boiler. The model will not be gauge adjustable but will be available in either 32mm (‘O’ gauge) or 45mm (‘1′ gauge) and will not have insulated wheels. The axles run in bronze bearings and all the rods and valve gear (piston reverse) will be manufactured from stainless steel.  The cab roof is fixed, access to the regulator and reverser is via the cab doors, water via the boiler filler cap, the gas filler is under the dummy coal load and the lubricator filler is in the right-hand bunker. The copper boiler is fitted with a gauge glass and blow-down valve.  The model is built from stainless steel and brass. Although fitted with TR buffers and couplings the model will can be fitted with our Z1/Z2 chopper couplings for those who wish to use them.  The model will be available in TR green, Indian Red or black.  We would like to thank David Fletcher for the superb drawings and members of the Talyllyn Railway for their help in providing data for the model.

You can download the instructions for this loco here.

Here’s a video appraisal of the locomotive.