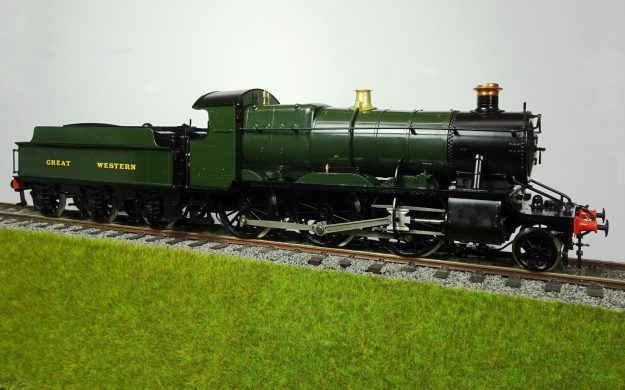 The GWR 43XX 2-6-0 ‘Moguls’ were a product of Churchward’s standardisation policy at Swindon and owe their origin to the ‘family’ of locomotives he developed at the beginning of the 20th century.  In 1906 Churchward fitted a more powerful Standard No. 4 boiler to his successful 3100 Class 2-6-2T to create the GWR 3150 Class. These showed themselves to be successful locomotives but their 65 ton weight and 2,000 gallon water capacity meant that they tended to be restricted to suburban passenger traffic. In 1909 Harry Holcroft, working in the Swindon drawing office, obtained permission for a working trip to Canada and was much impressed with the small-wheeled ‘moguls’ in use there. Churchward was looking forward to the replacement of various of his predecessor’s 4-4-0 classes on secondary duties and, knowing of Holcroft’s interest in the type, approached him and asked, “Get me out a 2-6-0 with 5′ 8″ wheels, outside cylinders, the No. 4 boiler and bring in all the standard details you can.”  Using parts ‘off the shelf’, the cab and outside cylinders of the ‘Saint’ class, the wheels of ’31XX’ 2-6-2 tank, the No. 4 boiler (in its superheated form) and a 3500 gallon tender, little additional design work was required.  After the initial 20 had been produced with the short ‘Saint’ style cab subsequent locomotives had the cab extended 9″ to accommodate the injector better, trading route availability for ease of maintenance.

The class was built in a series of batches from 1911 until 1923 with Collett adding further examples (with a side-window cab) between 1925 and 1932 and in total 342 of these useful mixed traffic locomotives were built, they were at home with passenger trains at 60mph as as with moderately heavy goods trains.  Like any long-lived design, numerous details differed between batches including cab length, outside steam-pipes, ballast weights, experiments with oil-firing and the fitting of screw reverse to the Collett examples.  The class served all over the Great Western and operated to destinations as diverse as Tonbridge, Andover and Liverpool and 11 examples from the 53XX series were sent to France to serve with the Railways Operating Division (ROD) during WW1.  During the 1930s class members were withdrawn and their wheels and motion parts used to create the ‘Manors’ and ‘Granges’, a process interrupted by WW2 after which British Railways started to scrap the entire class, the last examples being withdrawn in 1964.  Luckily two survived, No. 5322, now at Didcot Railway Centre, and Collett example No. 9303 at the Severn Valley Railway.

The model is built to1:32 scale for 45mm gauge track, gas-fired with a single flue boiler.  Built to a similar formula as our very successful 61XX 2-6-2T, the chassis is constructed from stainless steel, the wheels are un-insulated. The boiler is copper, the cab and bodywork are constructed from etched brass. The gas tank is in a water bath in the tender.  The model will run round 4′ 6″ radius curves and is happy on code 332 or code 250 tracks, however, we do not recommend running through LGB code 332 pointwork.  We are aware that there were a large number of livery variations among members of the class and will therefore be offering the variants subject to order volume.

We’d like to thank David Fletcher for the marvellous drawings he has produced of this useful locomotive.  Like other fine scale models from Accucraft, it will provide many years of enjoyment.