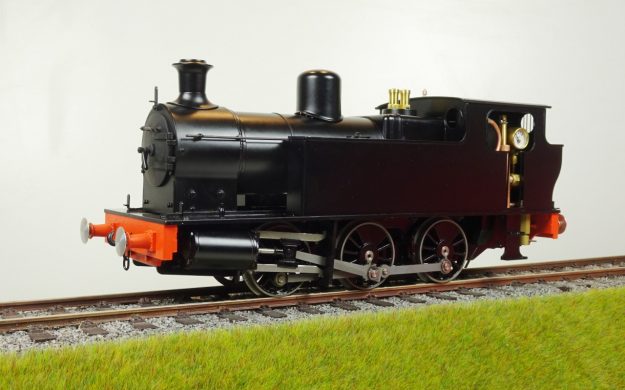 Although six did, indeed, go to colliery systems, two were sold to the Alexandra Docks Railway, one to the Brecon & Merthyr Railway and one to the light railway empire of Colonel Stephens at the East Kent Railway.  This ensured that members of the class started to receive modifications, the Lambton, Hetton & Joicey Colliery example having its cab cut down (in common with all L.H. & J.C. locos) while those that were absorbed into the Great Western Railway gained Swindon boiler fittings.  Three ‘main line’ examples all ended up being allocated British Railways numbers in 1948 and two of them continued in service with B.R. for some time while some of the colliery engines were still at work in the late ‘60s.

Our model offers strength and simplicity and we hope it will become the benchmark for starter locos in 1:32 scale in much the same way as ‘Ragleth’ and its predecessors have in 1:19 scale. The loco is internally gas fired with a centre flue boiler, opening smokebox door and has un-insulated wheels as standard. The axles run in bronze bearings and all the rods and valve gear are manufactured from stainless steel. The cab roof flips up and over sideways to give access to the gas, water and lubricator fillers. The boiler is fitted with a water level check valve, a removable dome to allow the fitting of a Goodall valve and the displacement lubricator has an under floor drain valve. The coal in the bunker can be lifted out to give access for radio control fitting. The model is built from stainless steel and brass, and with the correct maintenance, will give a lifetime of pleasure. It is offered in three variations, black with twin safety valves or in ‘Swindon’ condition GWR green or black with a safety valve bonnet.