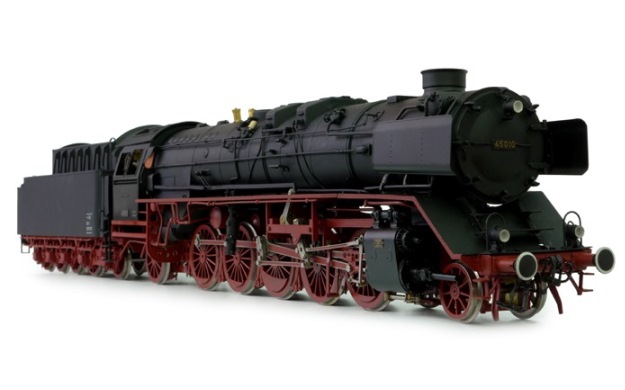 The Class 45 engines were the most powerful steam locomotives ever operated in Germany. Two were built between 1936 and 1937 by Henschel, followed by another 26 locomotives in 1940. However a further order for over 100 more was cancelled in 1941 following the outbreak of the Second World War and the need for simpler wartime locomotives, the so-called Kriegslokomotiven.

Initially poor performers, like the DRB Class 06, because of inefficient boiler design, the introduction of mechanical stoking and improved boilers transformed locomotives. In their final years numbers 45 019 and 45 010 were used time and again for heavy goods train duties that the Class 44 locomotives had difficulties with.  The sole preserved example, 45 010, was badly damaged in the fire that destroyed much of Nuremberg Transport Museum in 2005 but there is a move to restore it.