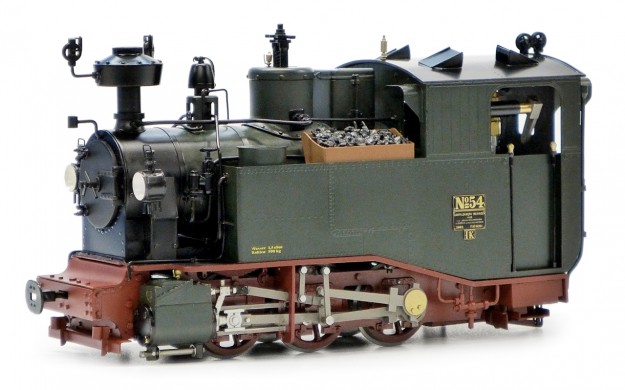 The original Saxon Class IK were built by the Sächsischen Maschinenfabrik, formerly Richard Hartmann AG in Chemnitz. The Royal Saxon State Railways acquired a total of 39 locomotives of short, stout, tank locomotives between 1881 to 1892. The first five locomotives went to the Zittau-Oybin-Johnsdorfer Bahn (ZOJE) until it was was acquired in 1906 by the Saxon State. During this period the locomotives gained a number of modifications.

The class disappeared from the State Railway in the 1920s but the last of this type was only scrapped in 1964 after 80 years of service in considerable Schmiedeberger foundry.

From 2006 to 2009 a unique project started to build a faithful reproduction of Saxony’s first narrow gauge locomotive, creating a copy of the long lost type by using old and new drawings to assemble the new machine. After three and a half years of dedicated work, Class IK No. 54 was officially commissioned in Radebeul.