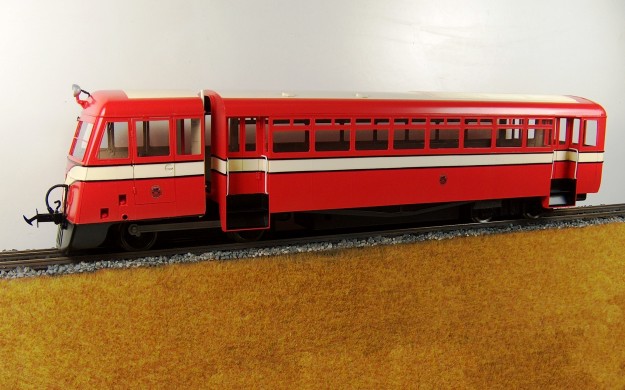 Commissioned by TrackShack in 1:20.3 scale, these railcars were bound to prove popular with Isle of Man modellers.

When the County Donegal Railways Joint Committee was selling surplus assets in the early 1960s, the Isle of Man Railway were looking for a cheap alternative to their ageing steam locomotive fleet and purchased these two railcars. They had already been allocated fleet numbers which were retained by the new owners but it was only when the ex-contractors’ engine No. 18 Ailsa was officially numbered in 2005 that the fleet had ever been in correct sequence. These railcars have been the subject of much controversy in the late 1990s when their over-budget rebuild was brought to a halt by incoming management and since this time no work has been done on them.

The preservationist group Isle of Man Steam Railway Supporters’ Association have campaigned for their completion, especially in conjunction with a potential commuter train services between Port Erin, Castletown and Douglas, which would extend the service that is laid on annually by the railway in connection with the T.T.. The TT Commuter service is currently run using a steam locomotive and hauled stock, which leads to high operating costs. A shift in management attitude could see their return to service in the future, but for the time being, they remain in store at Douglas station awaiting completion and return to service. (source: Wikipedia)