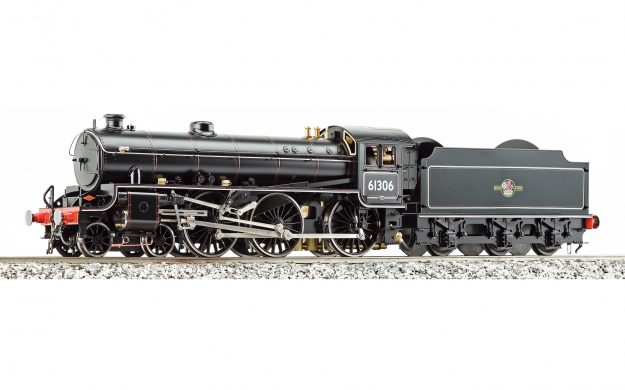 The London and North Eastern Railway (LNER) Class B1 4-6-0, designed by the LNER’s chief mechanical engineer, Edward Thompson, was a mixed traffic 4-6-0 used for general passenger and freight duties.  Intended as a ‘maid of all work’ akin to the LMS Black 5 or GWR Hall Class, they were the first two cylinder LNER design locomotives to be built since the grouping and were simply and ruggedly constructed for good economic reasons. introduced in 1942, 274 were built by LNER and 136 by British Railways after nationalisation in 1948, the majority being constructed by outside contractors North British and Vulcan. The first 40 of the class were named after breeds of antelopes and they became known as ‘Bongos’ after No. 8306 Bongo, many carrying exotic names such as Klipspringer and Nyala although eighteen were named after LNER directors.  Free-steaming with a 225psi boiler, these powerful locomotives operated throughout the LNER system in England, Scotland, and even on the Southern Region.

Two B1s are in preservation now, No. 61264 and No. 61306. The North British Locomotive Company built No. 61264, which began as No. 1264 until British Railways took ownership in 1948. The only LNER locomotive to survive in Barry scrapyard, it was rescued in 1973 and has been restored to mainline traffic by the Thompson B1 Locomotive Trust.

No. 61306, built in 1948, was delivered after nationalisation to British Railways. In preservation, it was painted LNER apple green livery and given the number 1306, which would have been its LNER allocated number had LNER not been nationalised, and the name Mayflower, taken from a scrapped BR built Thompson B1. No. 1306 is currently owned by David Buck, chairman of the UK railtour company, Steam Dreams.

Following a suggestion made by the late John van Reimsdijk some 20 years ago, the B1 represents a fresh approach by Aster, being a less complicated and more affordable locomotive, either as a kit or ready to run, a perfect starting point for someone wishing to build an Aster locomotive or just have the pleasure of running one. Unlettered and un-numbered kits will also be available. Versions proposed: