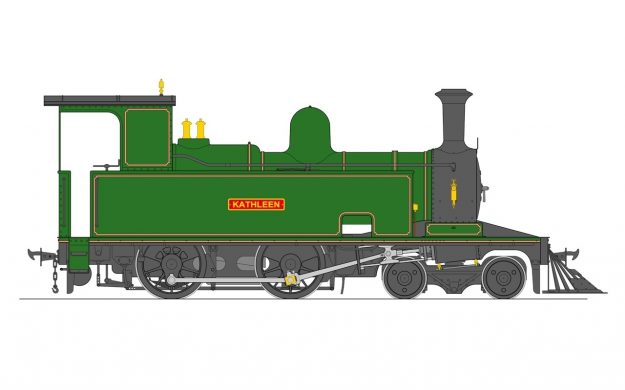 As previously announced, having produced hundreds of Isle of Man locomotives in various guises we have decided to shift our focus for 3′ gauge locomotives to the Emerald Isle and start working our way through some of the gorgeous Irish prototypes, starting with the elegant Cavan & Leitrim 4-4-0 tank locomotives.

The Cavan & Leitrim Railway was one of many rural Irish 3′ gauge railways, in this case serving the counties of Leitrim and Cavan in northwest Ireland. Unusually for Ireland, this line survived on coal traffic, from the mine at Arigna, which ensured that it was the last narrow gauge line to close there.  The railway opened in 1887, the section from Belturbet in County Cavan to Dromod in County Leitrim as a light railway, and as a tramway from Ballinamore to Arigna. Ballinamore was the hub of the line, with the locomotive depot and works. At Belturbet the line connected with the Great Northern Railway (Ireland) broad-gauge branch to Ballyhaise on the Clones to Cavan line, and at Dromod connected to the Midland Great Western Railway mainline from Dublin to Sligo. The line was extended to Arigna in 1920.  At the start both lines were operated by eight Robert Stephenson and Company 4-4-0T locomotives of two distinct variations, four ‘main line’ and four fully skirted ‘tramway’ types. In later years locomotives from other closed narrow gauge lines supplemented or replaced the C&L fleet.

We have chosen to model the two surviving locomotives in their final form, No. 2 Kathleen in ‘tram’ condition with the extended cab roof and tram style cab (albeit without full skirts) and No. 3 Lady Edith in ‘main line’ form without these additions.  Locomotive Nos. 5 to 8 were supplied by the makers complete with skirting over wheels, cowcatcher, bell, and headlamp at the bunker end, typical of a ‘tramway type’ locomotive for use on open (unfenced) track. These locomotives were fitted with condensing gear and each cab was fitted with duplicate driving controls. In due course all eight locomotives were re-boilered, increasing their working weight from 25 to 27 long tons and numerous rebuilds saw components exchanged between individuals.  At the 1925 amalgamation the C&LR became part of the Great Southern Railways and the eight locomotives, the rolling stock and infrastructure passed to the new company (along with an 0-6-4T locomotive, No. 9 of 1904), in due course losing their original green livery for GSR grey and later black, however, this did not happen overnight; two retained the original livery as late as 1932.  Two examples survived the be preserved, Kathleen in the Ulster Folk & Transport museum and Lady Edith at the New Jersey Museum of Transportation in the USA, although there are moves to repatriate her.  We’d like to thank our friends at the Ulster Folk & Transport Museum and the Cavan & Leitrim Railway Preservation Society at Dromod for their help in gathering data for these models; the retail profit* from any example purchased in Northern Ireland will go to the former, the retail profit* from any sold in Ireland will go to the latter and a percentage of all UK sales will be split between the two organisations.  Once produced, David Fletcher’s superb drawings will be available to purchase from either organisation.

The model is internally gas fired and has piston valve cylinders. The boiler is fitted with a water gauge and a water top-up valve is supplied, the lubricator needs to be emptied with a syringe, there being no room for a blow down valve, the gas filler valve is under one of the water tank filler, the gas control valve is disguised as the brake standard and the cab controls are accessible via the hinged cab roof.  It is available in either fully-lined Cavan & Leitrim green, un-numbered GSR grey or plain satin black. Nameplates are provided for both Kathleen and Lady Edith but these are not fitted, allowing customers to choose another member of the class if they so wish.  The target UK RRP is £1950.00.