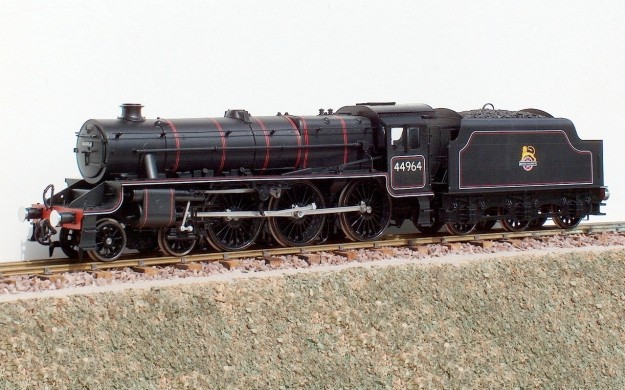 The London Midland and Scottish Railway’s Class 5 4-6-0, almost universally known as the Black Five was introduced by William Stanier in 1934 and 842 were built between then and 1951. Members of the class survived to the last day of steam on British Railways, in 1968 and eighteen are preserved.

The Black Fives were a mixed traffic locomotive, a “do-anything go-anywhere” type, designed by Stanier, who had previously been with the GWR. In his early LMS days he acquiesced with the completion of a small number of 2-6-0s already under construction. But Stanier realised that there was a need for larger locomotives. These were to be the LMS’s copy of the GWR Halls. They shared similar cylinder arrangement (two outside), internal boiler design and size and 6 foot driving wheel diameters.

The model is in 1:32 scale and 45mm gauge and features all metal construction with three versions. Pittman motor powers steel gears to steel drivers. Chassis is constructed from stainless steel. Boiler, cab, tender are constructed from etched brass. Like other fine scale models from Accucraft, it will provide many years of enjoyment. The model will run round radius 3 curves and is happy on code 332 or code 250 tracks.

Posted on Tuesday, 10th May 2011 by Accucraft
Bookmark the permalink.