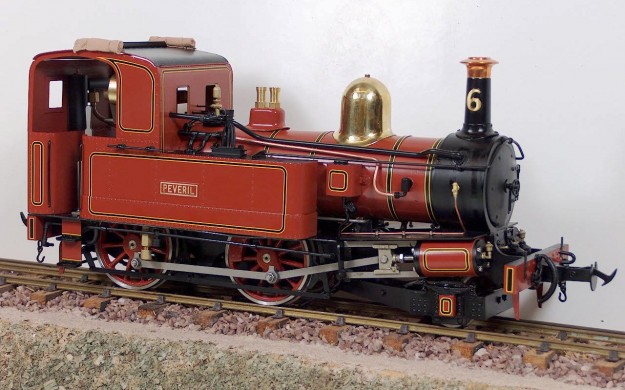 The Isle of Man Railway favoured locos built by Beyer Peacock with a 2-4-0 wheel arrangement.  No 6, ‘Peveril’ was built in 1874 and carried the standard Beyer Peacock characteristics – the outside framed Bissel truck, the lack of a bunker behind the cab and the angled cylinders. Like most of them, ‘Peveril’ has its number in brass numerals on the chimney. She was withdrawn from service in 1960 and was stored for several years together with No. 5 “Mona” in Douglas carriage shed. She was cosmetically restored by members of the Isle Of Man Steam Railway Supporters’ Association in 1994 and is now resident in the railway museum at Port Erin carrying the Indian red livery of the post-war years.

The model is electrically powered and has a 0-24 volt Pittman gear head motor.  Other versions with detail differences have also been produced (live steam loco illustrated).  This will be a “one time” only model and will not be produced in this form again.

Posted on Saturday, 7th May 2011 by Accucraft UK Ltd
Bookmark the permalink.