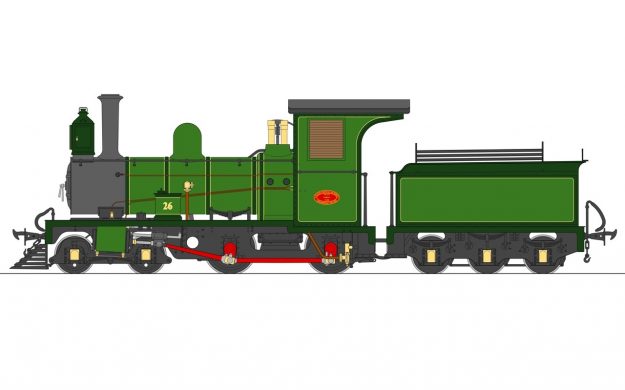 We are delighted to announce another 1:19 scale model for production in 2020, the iconic South African ‘Lawley’ 4-4-0. Construction of the first 2′ gauge railway in Southern Africa began in 1892. This was the 370-kilometre long (230-mile) line of the narrow-gauge Beira Railway which eventually stretched from Beira in Mozambique to Umtali across the Rhodesian border. The border was reached in October 1897 and the full line to Umtali was opened to traffic on 4 February 1898. The work was undertaken by Pauling and Company and was subcontracted to Alfred Lawley.

Between 1895 and 1898, the Beira Railway ordered 42 Falcon type F2 and F4 4-4-0 tender locomotives, supplied in six batches by Falcon Engine and Car Works Limited in England and the Glasgow Railway Engineering Company in Scotland. In service, these locomotives were soon nicknamed ‘Lawleys’, after the Beira Railway construction subcontractor.  The batches varied slightly in style, the first of the Falcon F2 loco­motives differed from later models of its class by having a cab with two rectangular louvred cab windows on each side and a dome fitted with a Salter safety valve. The locomotive was delivered by Falcon in 1895 and was numbered BR4. The next five F2 locomotives were also delivered in 1895, numbered in the range from BR5 to BR9. They differed in appearance from the first F2 locomotive by having larger single cab windows.

The next six locomotives ordered from Falcon in 1896, were of an altered design. The Falcon F4 was larger and heavier than the F2, with the running boards stepped down below the cab, a larger tube heating surface in the boiler, single slidebars, straight lipped chimneys, Ramsbottom safety valves over the fireboxes, and increased tractive effort. They were numbered in the range from BR10 to BR15 and could pull 180 tons up the ruling gradients.  At the end of 1896, another four of these engines were delivered from Falcon, numbered in the range from BR16 to BR19. They were similar to the previous batches, but had larger three-axle tenders with an increased water capacity.  The last sixteen Falcon-built locomotives were all delivered in 1897, numbered in the range from BR20 to BR35.

The construction of the last batch of ten F4 locomotives was subcontracted by Falcon to the Glasgow Railway Engineering Company in Scotland. They were built and delivered in 1898, numbered in the range from BR36 to BR45. The Glasgow locomotives had wasp-waisted safety valves and their engine numbers, also mounted on the sandboxes, were cast oval brass plates.  A couple of the class acquired bogie tenders built by John Fowler and thee ended up with BR6 and BR8.

In service the Lawleys had colourful careers, when the Beira Railway was converted to Cape gauge in 1900 the majority were stored apart from half a dozen which were sent to the Ayrshire Railway until this, too, was converted to Cape gauge in 1914.  WW1 saw some of the class used by the military and most ended up in South African Railways ownership, operating existing and new 2′ gauge lines in that country,  While in SAR service they acquired the classification NG6 but the Lawleys were gradually superseded by bigger locomotives until the last one was withdrawn from SAR service in 1935; however, this was far from the end of them and many continued in use with industrial or agricultural roles.  Several have been preserved with two operational at the Sandstone Trust line in South Africa and two repatriated to the UK as part of the Rampton Trust collection.

The museum quality model is internally gas fired and is gauge adjustable for either 32mm (‘0’ gauge) or 45mm (‘1’ gauge) – all the parts for this are supplied with the model. This operation can be undertaken by the owner and only takes a few minutes. The cab roof lifts up to give access to the water and lubricator fillers. The boiler is fitted with a water gauge, pressure gauge and the lubricator has an under floor drain, the gas tank is in a water bath in the tender. The model is fitted with slide valves, functioning Stephenson valve gear and is built from stainless steel, copper and brass.  Estimated UK RRP £2950.00 inc. VAT.

We would like to thank David Fletcher for the superb drawings.