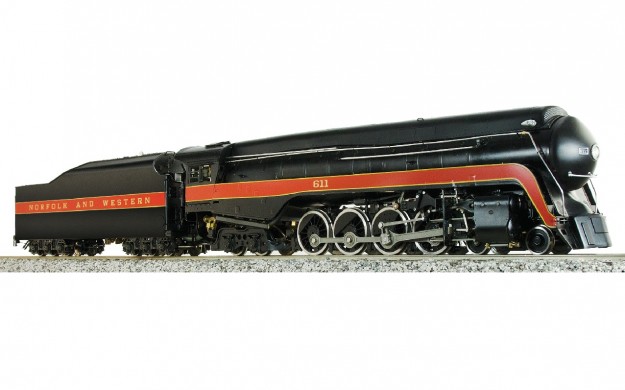 Some would argue that the Norfolk & Western Railway’s J-class represents the zenith of steam passenger locomotive development in the United States. The class was introduced towards the end of steam on U.S. railroads, but was designed and built without compromise to do the job in style. Conceived and assembled at N&W’s East End Shops in Roanoke, Virginia between 1941 and 1950, these elegant 4-8-4s only ever numbered fourteen examples. The first five were streamlined from the outset, the next six examples only being thus fitted later due to wartime economies, while the final three once again emerging fully streamlined from the start. Unusually for a passenger design, the class were only equipped with 70 inch driving wheels, which required perfect balancing of the wheel sets and drive train and the adoption of light-weight rods to allow 100mph running. However, the relatively small drivers and 300psi boiler pressure gave a very high tractive effort, 80,000 pounds, making the J-class the most powerful 4-8-4s built without requiring a booster.

The class quickly gained a reputation for hauling heavy trains at high speeds with an enviable record of reliability, often accumulating 15,000 miles per month. Despite this, the writing was on the wall for steam. Towards the end of the 1950s, N&W began receiving more diesels with a view toward replacing their steam fleet. In 1959, J-class #611 hauled a last special – the remainder of the class were scrapped. N&W #611, however, was lucky, thanks partly to an accident in 1956 when the loco derailed at speed near Cedar, Virginia. Due to its consequent good condition following a rebuild, and partly to the efforts of the legendary railroad photographer O. Winston Link, #611 was given to the Virginia Museum of Transportation in Roanoke in 1960.

After twenty years of inactivity, #611 was taken to Birmingham, Alabama for overhaul at the Southern Railway’s Norris Yard workshops, emerging in 1982 to haul specials on the newly created Norfolk Southern railroad until 1994. In 1995, after a serious accident related to Norfolk Southern’s steam program, #611 was once again confined to the museum at Roanoke.

Today, the Virginia Museum of Transportation’s “Fire Up 611” committee has recently completed rebuilding and preparing this fine locomotive for service again! The #611 was moved to the North Carolina Transportation Museum’s complex at Spencer, North Carolina, where the work was performed.

Accucraft’s 1:32 scale Norfolk & Western #611 will be our 20th anniversary locomotive! We are working with the N&W Historical Society, and the Virginia Museum of Transportation’s ‘Fire Up 611’, to produce the most accurate model of N&W #611 to date! Each model of #611 will also include special surprise items inside the box!