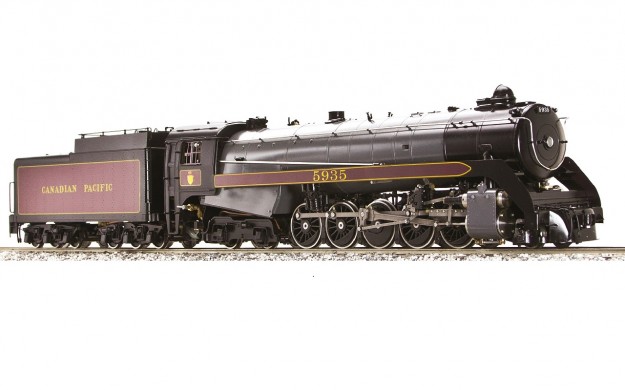 Accucraft’s ‘Selkirk’ #5935 represents the last T-1c class 2-10-4 built. Constructed by Montreal Locomotive Works in February/March 1949 as CP 5930-5935, these six oil burning T-1c class locos remained in service less than 10 years; the railway was already replacing steam with diesels. The first of the ‘Selkirks’ was built in 1929, in total twenty were constructed during this year numbered 5900 to 5919. The Canadian Pacific Railway’s classification was T1a. They weighed 340 tons fully loaded. They were named after the Selkirk mountain range that they crossed.

Another ten were built in 1938 and the Canadian Pacific Railway assigned these T1b class, numbered from 5920 to 5929. The T1b class was ten tons lighter with the boiler pressure increased from 275 to 285psi.The final six Selkirks, classed T1c, were built by the Montreal Locomotive Works shop in 1949. They were the last standard gauge steam locomotives built in Canada for a Canadian railroad. Much the same as the T1b except that they incorporated two cross-compound air compressors for rapid recharging of the air brakes. They were equipped with boosters and all were built as oil burners. The tenders held 12,000 imperial gallons of water and 4,100 imperial gallons of fuel oil and were equipped with six-wheel trucks.

The last Selkirks were taken out of service in 1959. All but two of this (T1c) class were scrapped. None of the earlier T1a class or T1b class locomotives was preserved. The 1:1 scale CP #5935 is preserved and on display at Exporail, the Canadian Railway Museum in Saint-Constant, Québec.