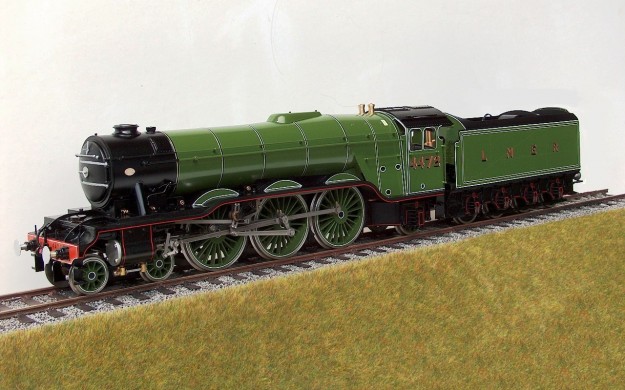 Sir Nigel Gresley was renowned for his Pacific express locomotives, the first of which, the A1 class, entered service in 1922. The A3 was a modification of the A1 and over time all of the surviving A1s were rebuilt as A3s. No. 4472 Flying Scotsman was built in 1923 and went on to become one of the most famous steam locomotives in the world setting many records along the way. After the war it was renumbered 103 then, after the nationalisation, carried the number 60103, remaining in service on the East Coast mainline until 1963. During its service career it covered over 2,000,000 miles and travelled non-stop from London to Edinburgh in 8 hours. It was sold into private ownership, was sent to America and Australia and is today under restoration at The National Railway Museum in York.

The model is gas-fired with slide valves and has all the features the Gauge 1 fraternity have come to expect from an Accucraft locomotive.  The cylinders are fitted with drain cocks. The chassis is constructed from stainless steel. The boiler is copper, the cab and tender are constructed from etched brass. Like other fine scale models from Accucraft, it will provide many years of enjoyment.  The UK RRP is £2495.00.