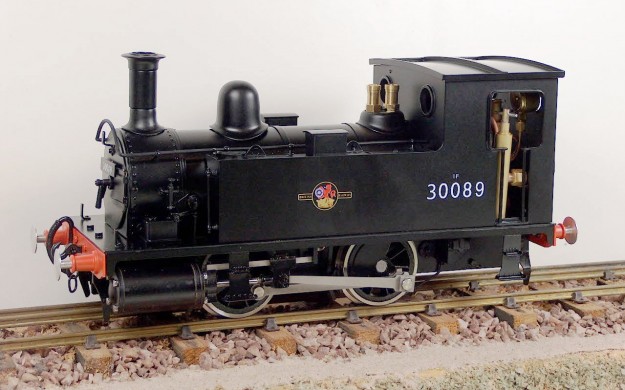 An initial batch of twenty locomotives were designed by William Adams for the London & South Western Railway and constructed at Nine Elms between 1891 and 1893.  These small but powerful engines were intended for shunting in restricted sidings with tight curves and were deployed in such locations as Southampton Docks, the Hamworthy freight branch and Poole Quay.  Drummond added five similar locos to the class in 1905 although assorted rebuilds saw a great many variations in cab design and boiler fittings.  Because of their work in the docks, twelve acquired names from locations along the French channel coast.  After a long career with the L&SWR, Southern Railway and BR, some were sold into industrial use and two have been preserved, Normandy on the Bluebell Railway and Granville at Bressingham.

Our first Gauge 1 live steam 0-4-0 tank engine is based on the L&SWR B4 Class, in particular No. 30089 Trouville which had a reasonably ‘normal’ cab.  Intended as an “entry level” loco in Gauge 1, the model is gas-fired with piston valves and has all the features you would expect from an Accucraft locomotive. The chassis is constructed from stainless steel, the boiler is copper and the cab is made from etched brass. Like other fine scale models from Accucraft, it will provide many years of enjoyment.

You can download instructions here INSTRUCTS B4 TANK LOCO