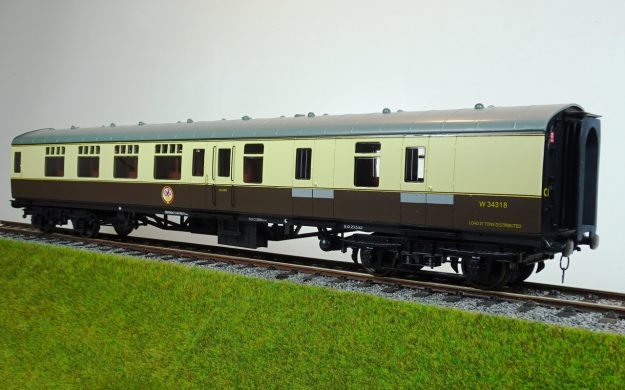 Introduced following the nationalisation in 1948, the British Railways Mk1 coaches were intended to be the standard carriage design for use across all routes, incorporating the best features of each of the former companies’ designs. They were meant to be much stronger than previous designs and provide better protection for passengers in the event of an accident.

The Mk 1 coaches were built in two distinct batches, the early vehicles (1951–60) and the ‘Commonwealth’ stock (named from the type of bogie used) from 1961 onwards.  Built of steel, the coaches were produced in a multitude of different formats and gradually replaced pre-nationalisation coaches across all the regions. The original bogies were a double bolster type, which like the carriages mounted upon them, were designated ‘BR Mark 1’ (BR1 for short). These gave an unsatisfactory ride and a new cast-steel design was introduced from 1958 (often referred to as the Commonwealth type).

After many years of front line service, the British Railways fleet was superseded by the Mk2 and Mk3  coaches and steadily withdrawn from service.  This was, however, far from the end of the story and hundreds were purchased by preserved railways and main line tour operators who still rely on them to provide passenger accommodation today.

Some models in the earlier batch were fitted with Accucrafy knuckle couplers.  As opposed to the Kadee couplings fitted to the first batches of these coaches, the Accucraft knuckle couplers work on a more positive lock.  It is necessary to have one coupler locked and the other open to ensure they lock when coupling up – the easiest way to ensure positive coupling is to have the coaches on a piece of firm, straight, level track and push them together until the corridor connections compress 5 – 8mm at which point a physical click can be heard or felt.  To disengage them you push the locking pin (which projects below the head of the coupler) up, this unlocks the coupling.