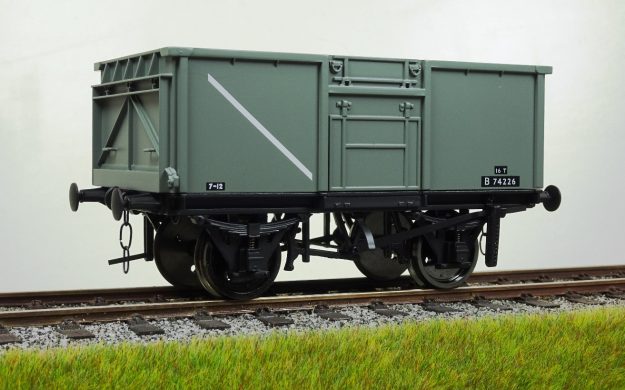 The BR mineral wagon dates back to the Second World War when the Ministry of War Transport placed orders for steel bodied mineral wagons. These designs formed the basis for the BR 16 Ton mineral wagon. With a 9′ wheelbase the wagons featured an end door (to facilitate emptying the wagon by end tipping), a large side door and a smaller drop down flap above it. The early batches also featured bottom doors but this feature was soon discontinued. More than 220,000 of these wagons were built both in BR works and by private builders between 1950 and 1958 and they were still common throughout the BR network well into the 1980s. In the late 1970s many of the wagons remaining in service were fitted with new bodies. The most noticeable difference on these vehicles was the omission of the top drop down door on the wagon side.

In 1947 a service of regular fast freight trains was inaugurated by the LNER between marshalling yards at Annesley, near Nottingham and Woodford Halse. These trains, travelling over the GCR route, carried coal from the Nottinghamshire coalfield and steel products from Yorkshire and the North East destined for the London area or South Wales. This regular service gained a reputation for fast running and the nickname of ‘Windcutters’ was adopted by enthusiasts while enginemen generally referred to them as ‘Runners’. In 1992 The Great Central Railway launched a scheme to restore a rake of these vehicles. Wagons in the ‘Windcutter’ fleet represent most of the major variations, including one of the early wagons originally fitted with bottom doors, although the majority carry the later body style as fitted in the 1970s – you can see more here.