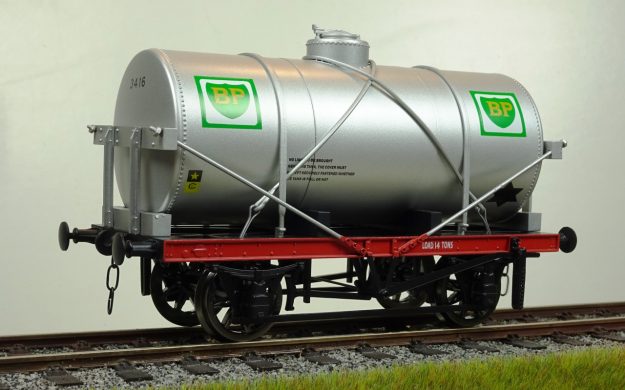 The earliest tank wagons on Britain’s railways were rectangular affairs, little more than a metal box on a wooden framed chassis.  This type of vehicle presented stability issues because the large surface area to volume ratio allowed the fluid contained to ‘slop’ from end to end or side to side.  It was found that a cylindrical tank (as long as it was full) reduced this tendency because of the smaller surface area and from the turn of the 20th century these wagons became the norm for the conveyance of liquids.

Our tank wagons are typical of the early 20th century design, to hold the tank down in the frame there would be either wire rope strops passed over the top or flat metal straps (sometimes both). The wire rope strops were not used on new builds from the mid 1920s, on cylindrical tanks these rope strops were usually crossed to either side of the tank filling dome. The straps or strops were secured to the chassis with some form of tensioning adjustment. At either end of the tank there would be quite solid supports to stop the tank shifting along the wagon in transit or when being shunted. These usually consisted of a pair of vertical posts with a hefty cross piece at the top. The cross pieces had holes in the ends through which metal rods were passed, leading down to somewhere about the middle of the chassis where they were bolted in place. The ends of the rods were threaded where they passed through the end timbers and nuts were then tightened onto these to hold the assembly in place.

This type of vehicle survived in traffic well into the British Railways era and many ended up as oil or fuel tanks in locomotive depots.  The introduction of fleets of new, long wheelbase or bogie tankers saw the wholesale withdrawal of the older designs although a surprising number survived to preservation.