Welcome to our March bulletin.  February saw the arrival of the first 100 ‘Large’ Quarry Hunslets in 1:19 (16mm) Scale.  This initial batch was entirely pre-sold but we should have further supplies during March so please be patient!  Work continues to develop the 43XX and design and drawing work on our next small 16mm (1:19) scale locomotive is now complete – all will be revealed in our April update!

Encouraging progress is being made on the production sample and we hope to bring you some images of that very soon.  Don’t miss out on getting yours in the first batch!

The model is built to1:32 scale for 45mm gauge track, gas-fired with a single flue boiler.  Built to a similar formula as our very successful 61XX 2-6-2T, the chassis is constructed from stainless steel, the wheels are un-insulated. The boiler is copper, the cab and bodywork are constructed from etched brass. The gas tank is in a water bath in the tender.  The model will run round 4′ 6″ radius curves and we are aware that there were a large number of livery variations among members of the class and will therefore be offering the variants subject to order volume. We’d like to thank David Fletcher for the marvellous drawings he has produced of this useful locomotive. You can see full details here.  UK RRP £2500.00, fully lined BR versions £2595.00.

This really is the last opportunity to pick up one of these beautiful Victorian locomotives.  We have just the odd example of each livery left in stock including the new variant, a Drummond green example carrying a Drummond boiler and numbered 486.  This is also the last opportunity you will have to avail yourselves of the chance to pick up a matching set of L&SWR carriages at a 10% discount (if you have purchased a Radial tank).  You can see all the liveries available here.  UK RRP £1995.00 while remaining stock lasts, just one kit left  £1875.00 (S32-15KA Adams green).

The factory has kindly supplied us with some photographs of the initial painted samples, delivery will follow in the first quarter of 2021 and it will be a very limited run. Those people who ordered the Adams Radial tank are entitled to a 10% discount on a set of four of these matching coaches. Don’t miss out if you would like a set!

Sets comprise, two brake thirds, one composite, one all third, discounted by 5% for a set of four, 10% if ordered with an Adams Radial Tank. Please email us or ‘phone to discuss your rolling stock needs!

The first 100 Quarry Hunslets have now sold though and our dealers have all had their allocations.  The final batch is now complete at the factory and will be shipped soon – don’t miss out!

As soon as we had a chance to run our model of Dolgoch last March we realised that the design brief for this small locomotive had produced an almost perfect balance of performance and duration and, despite having instinctively avoided some of the smaller designs, the possibilities for new engines were now numerous.  With Talyllyn No.1 delivered we concentrated on the Quarry Hunslet, a design whose characteristics are much the same as the TR models and has proven to be a real crowd-pleaser. 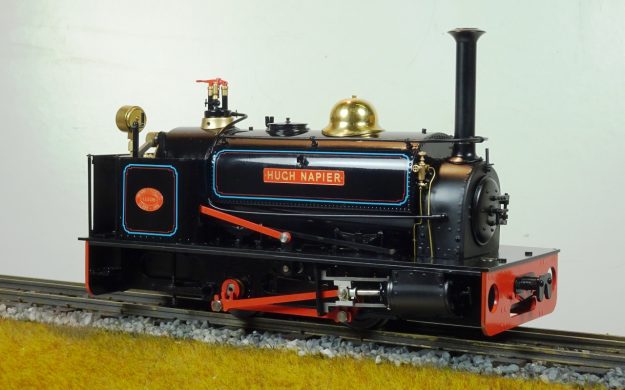 The model is gas-fired and fitted with a water top up valve, water check valve, miniature pressure gauge; constructed of stainless steel and etched brass with a copper boiler, the model will, as usual, be covered by our two-year warranty.  The UK RRP is £1595.00. Colours available, subject to production batch: