Welcome to our April news bulletin.  This month we are pleased to announce a new small 1:19 (16mm) Scale locomotive for release early next year, as well as some developments in the 1:32 Scale range.

Much encouraged by the good reception of our Quarry Hunslet and the almost complete sell-out of those little locomotives, we are delighted to announce our next ‘small’ 16mm Scale engine, the delightfully proportioned ‘Cranmore’ type Peckett 0-4-0ST. Peckett & Sons of Bristol had long been renowned for producing industrial tank engines, many of them small saddle tanks, and the ‘Cranmore’ type had its origins in an 0-4-0 saddle tank version of the special 7×10” cylinder design, Works No.1030 of 1904 Gamecock which would be later be referred to as a ‘Cranmore Class’. The order was placed by the Mendip Granite & Ashphalte Co. for its 2’ gauge line connecting the quarry to Cranmore Station on the GWR and after its career there it was scrapped, although it is not known when. Small numbers of this type continued to be built, mainly for export and one (Works No. 1711 of 1926) was bought by the Metropolitan Gas Co., Melbourne, Australia, named Sir John Grice in 1928. Withdrawn in 1941 it was sold in 1962, joining the Whistle Stop Amusement Park, Frankston in 1965. The 2’ 6” gauge locomotive later moved to the Puffing Billy Railway in 1974 as a static exhibit but restoration started in 1978 and it was returned to service in 1981 painted light green with yellow lining. 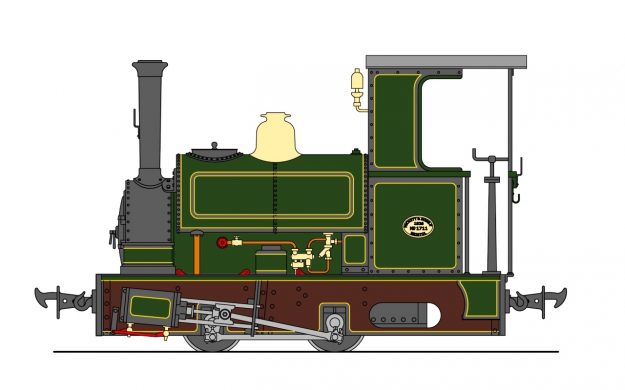 The model is gauge-adjustable (32mm and 45mm), gas-fired and fitted with a water top up valve (hidden under the tank filler), water gauge with blow-down valve, lubricator and pressure gauge; constructed of stainless steel and etched brass with a copper boiler, the model will, as usual, be covered by our two-year warranty. The anticipated UK RRP is £1595.00 (for pre-orders, subject to the usual provisos), available Q1 2022. As ever, we’d like to thank David Fletcher for his superb drawings, illustrating the livery options. In response to customer requests, we will be supplying the model with two domes, the factory original (ogee) pattern and the simpler Australian type. The locomotive is fitted Accucraft chopper couplings. You can see full details here. Specifications:

Despite our early prediction that the 43XX might not be available as a kit we are delighted to report that the locomotive will also be available in this form.  Following the successful formula used with the Adams Radial Tank kits, assembly will be a simple nut and bolt together process requiring only simple tools and a bit of patience.

The model is built to1:32 scale for 45mm gauge track, gas-fired with a single flue boiler.  Built to a similar formula as our very successful 61XX 2-6-2T but with kit assembly in mind, the chassis is constructed from stainless steel, the wheels are un-insulated. The boiler is copper, the cab and bodywork are constructed from etched brass. The gas tank is in a water bath in the tender.  The model will run round 4′ 6″ radius curves and is happy on code 332 or code 250 tracks, however, we do not recommend running through LGB code 332 pointwork.  We are aware that there were a large number of livery variations among members of the class and will therefore be offering the variants subject to order volume.  The pre-shipment UK RRP will start at £2350.00 for the kit, £2500.00 for the RTR version, available to pre-order now.