With just a week to go until our Open Day and sale, tidying the warehouse has turned up a few more treasures so be sure not to miss out on these bargains!  We also bring you news of a new Isle of Man ‘pairs’ coach, an update on the rapid sale of the Talyllyn locomotives, some images from the factory and a revised list of goodies from the Accucraft eStore ‘specials’ page.

The format will be much the same as previous open days, once again at Unit 4, Long Meadow Industrial Estate. We will have factory seconds, damaged items and test samples to sell as well as many ‘end of line’ items. This stock will be offered for sale on a ‘first come, first served’ basis without prior reservation and will include ‘open box’ locomotives, rolling stock and track components as well as sundry ‘kits of parts’ with potential for re-assembly!  As they say, “everything must go!”.  This year there will be a particular emphasis on 1:32 scale products.

We will be supported by associated traders and stands including Chuffed 2 Bits, Swift Sixteen and Black Cat Bridges.  We will be running Accucraft locomotives in 1:13.7, 1:19, 1:20.3 and 1:32 scales.  Opening times are 10:30hrs to 16:00hrs and there will be an on site café offering refreshments and light lunches.

Here’s a little taster of some of the stock which we will be offering as ‘open box’ or sale items, as well as new releases on show. 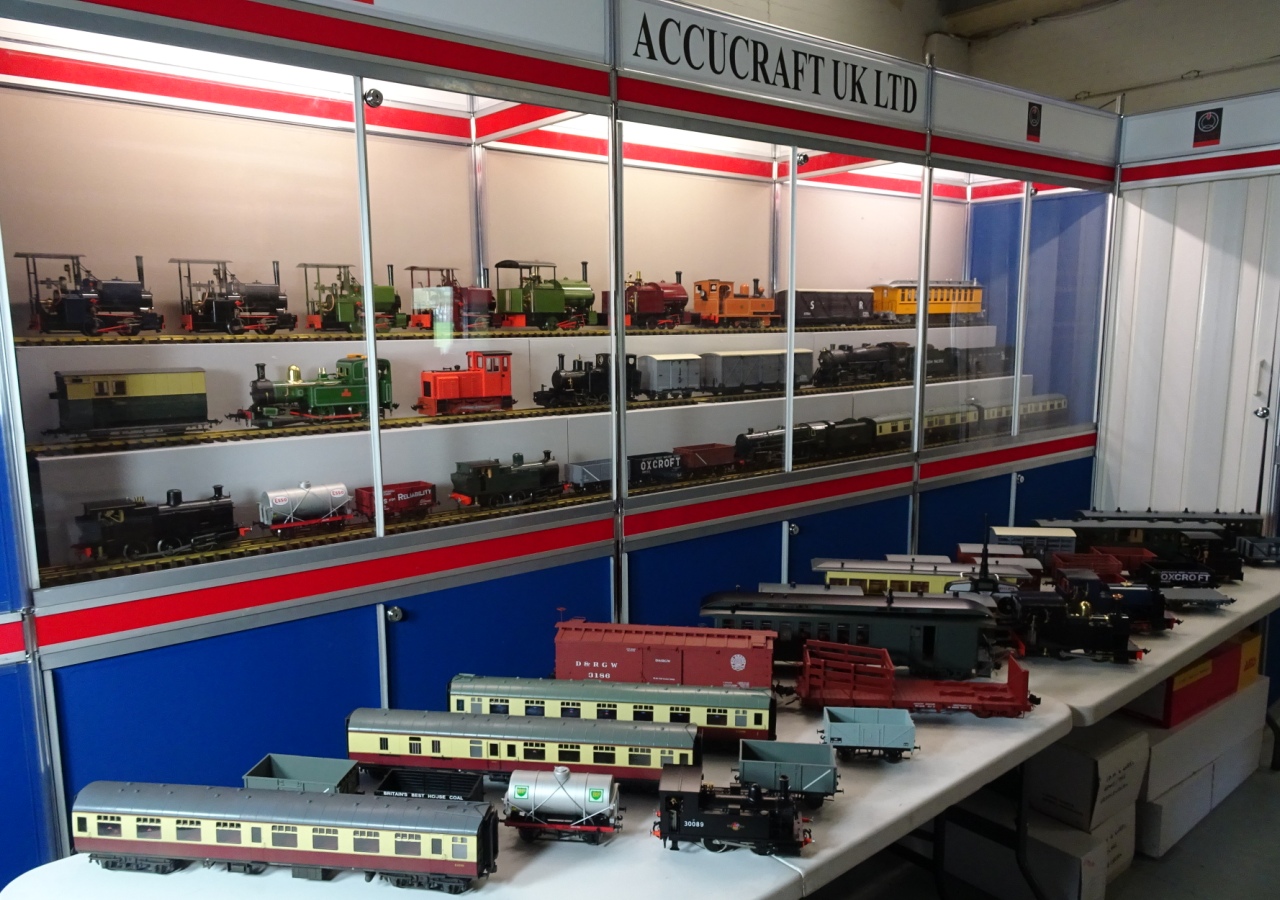 A new ‘Pairs’ coach for the Isle of Man!

With stock of the Isle of Man ‘pairs’ coaches running low we thought we’d have one last throw of the dice with a ‘might have been’ coach, a half brake made up of an ‘E’ Van and a four-wheel coach in the same manner in which the ‘pairs’ coaches were assembled, albeit allowing for the slightly different design of panels on the ‘E’ Van.  Although it is a freelance design we think the end result is most attractive and will go well with an existing rake of the ‘pairs’ coaches, the UK RRP will be £175.00 (part number R19-26) and the next batch of four-wheelers and ‘E’ Vans will carry an RRP of £90.00.

With the majority of the initial batch of Dolgochs pre-sold and production well under way it looks as though we will have to produce No. 1 Talyllyn as soon as possible! Pre-orders for the latter are already healthy and we thank our customers for their faith in us to deliver these attractive locomotives.  If you haven’t pre-ordered Dolgoch already you may have to wait for a second run which will, alas, inevitably be more expensive!

In 2013 we were approached to produce all the Talyllyn Railway locomotives as a commission and although this never came to fruition we had worked up the concepts and designs with a view to producing them of our own accord.  Due to developments within the trade we have decided that, rather than waste all this effort, we would bring the first of these, Dolgoch, to the market in 2019.  Once this has been delivered we will work on TR No. 1, Talyllyn, with a view to delivering the model in early 2020 with a target price of £1650.00 for Talyllyn (inclusive of VAT and UK warranty, subject to the usual currency caveats).  You can find full details of Talyllyn here.  We would like to thank David Fletcher for the superb drawings and members of the Talyllyn Railway for their help in providing data for the model of No. 1.

The model is built to a scale of 16mm:1′ (1:19 scale) and follows our standard design brief being internally gas-fired with a centre flue boiler. The model will not be gauge adjustable but will be available in either 32mm (‘O’ gauge) or 45mm (‘1′ gauge) and will not have insulated wheels. The axles run in bronze bearings and all the rods and valve gear (piston reverse) will be manufactured from stainless steel.  The cab roof is fixed, access to the regulator and reverser is via the cab doors, water via the boiler filler cap, gas via the toolbox and the lubricator filler is in one of the bunkers. The copper boiler is fitted with a gauge glass.  The model is built from stainless steel and brass. Although fitted with TR buffers and couplings the model will be supplied with a pair of adapters for our Z1/Z2 chopper couplings for those who wish to use them.The model will be available in TR green, Indian Red or black.

A recent trip to the factory found ‘Wrens’ under construction, Howard vans being moulded and painted and numerous other projects being progressed.  Graham Langer was accompanied by Bram Hengeveld of Exclusive Models (Netherlands), both of them there to discuss future models such as the new ‘pairs’ coach. 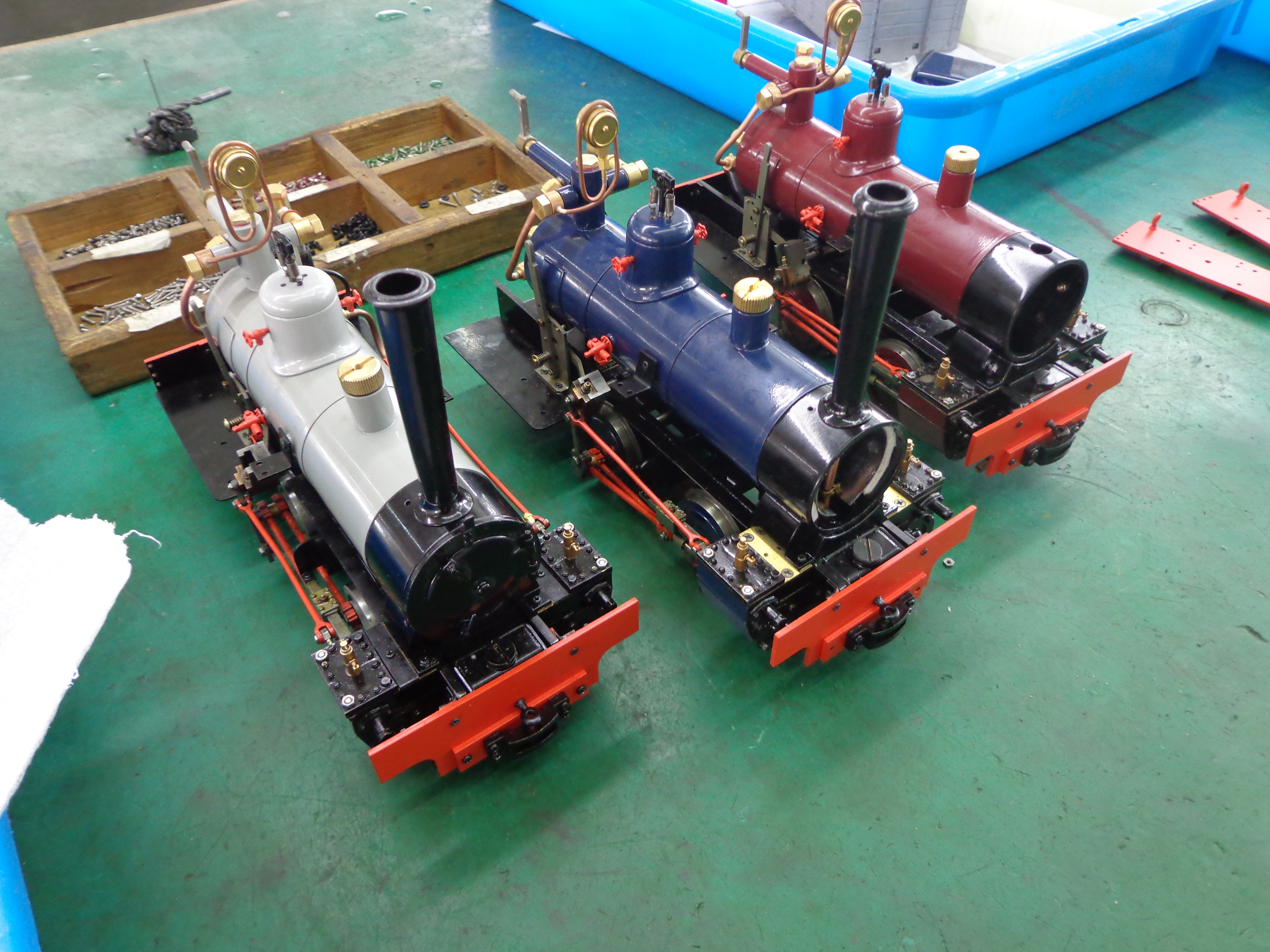 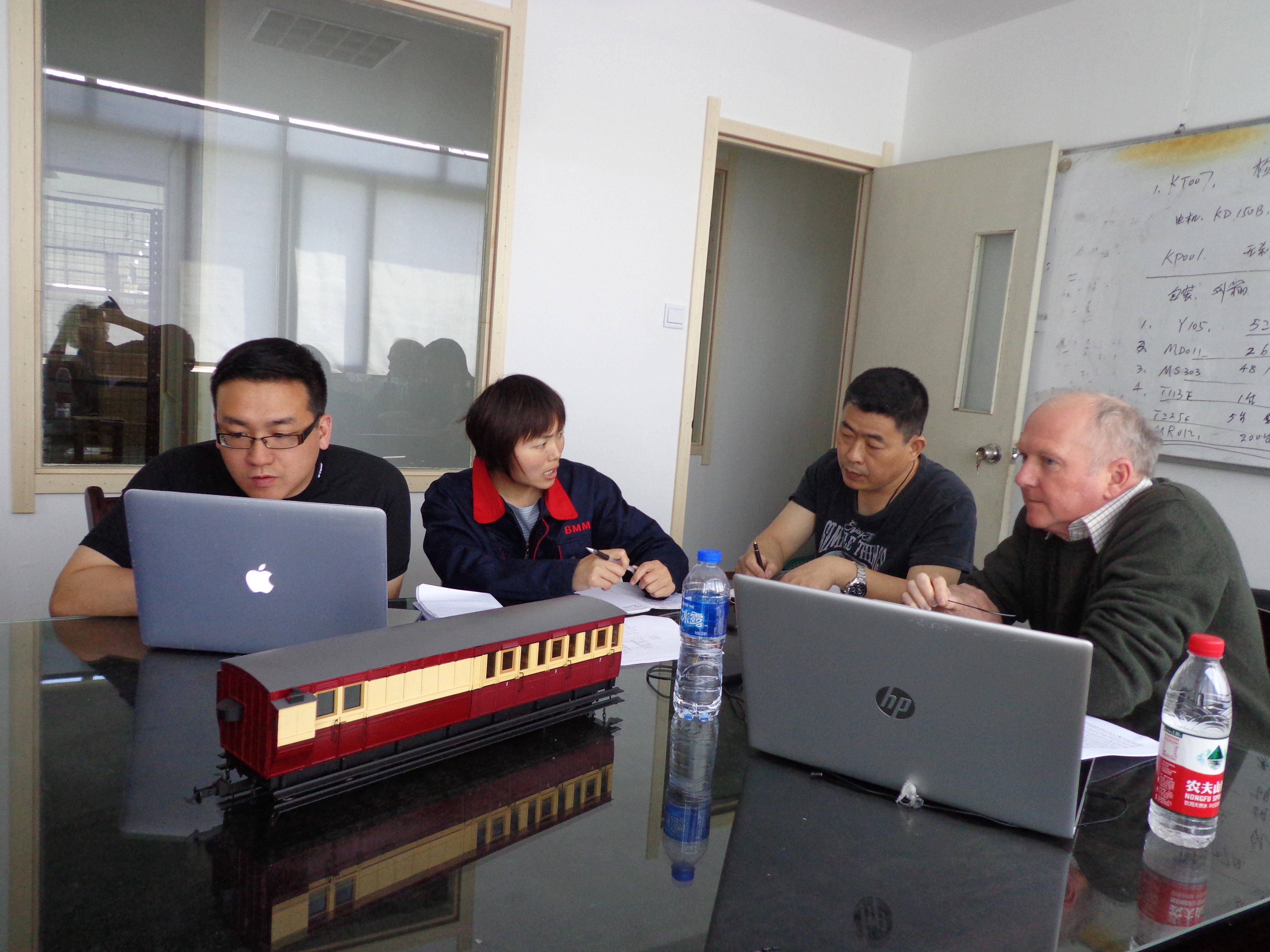 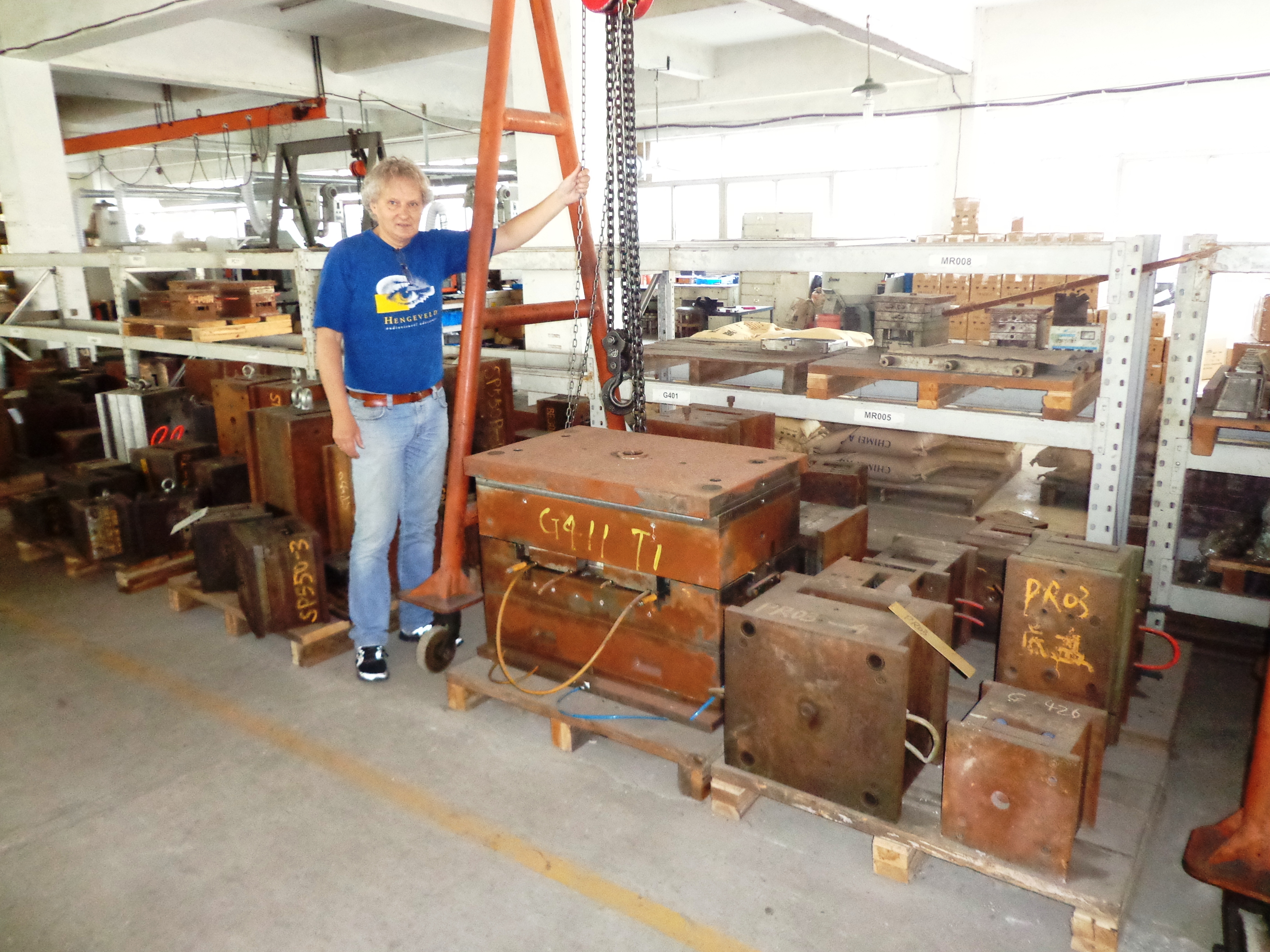 Bram demonstrates the size of some of the plastic injection tools – solid steel!

We are pleased to be able to offer the following items on a strictly ‘first come, first served’ basis from a recent sweep of the Union City warehouse:

You can see full details of these items and their condition here.