We are delighted to bring you news of the K1 Garratt commissioned by Anything Narrow Gauge and Garden Railway Specialists.  The engineering sample was unveiled at this weekend’s Llanfair Garden Railway Show, run in conjunction with the Welshpool & Llanfair Railway Gala.  In addition we also showed the first production sample of our new 1:20.3 Scale Isle of Man Railway ‘E’ Van.  We have also recently delivered a batch of WD Baldwins to dealers – don’t miss out.

Assembled in 1909, K1 was the first locomotive built to the Garratt Patent (No 12079) granted in 1907. K1 (and sister engine K2) were delivered to Tasmania in 1910 to work on the 2ft gauge North East Dundas Tramway where they hauled silver-lead ore for twenty years. By 1929 both engines were withdrawn from service following loss by the tramway of its major traffic. K1 and K2 were placed in storage but in 1947, Beyer Peacock purchased K1 as a museum piece. By this time the loco was a combination of the power units of K1 and the boiler frame of K2; the resultant locomotive (now known as K1) was shipped from Burnie (on Tasmania’s North coast) to Manchester (England). K2 was later dismantled and K1’s original boiler sold on for stationary use in a sawmill.

In 1947 K1 returned to Gorton Foundry, the Beyer Peacock works in Manchester where it was placed on display as a museum piece. After a failed initiative to steam the loco in 1955 and offering it to the Narrow Gauge Railway Museum in 1961, Beyer Peacock surveyed the locomotive with a view to selling it in 1963.  In 1966 it was bought by the Ffestiniog Railway and stored at Boston Lodge for nearly a decade before being placed on loan to the National Railway Museum in1976.

The prospect of a restored Welsh Highland Railway sparked the start of K1’s restoration in 1995, a process that took nearly a decade at a number of different sites and involved the construction of a new boiler.  K1 finally entered traffic on the reborn WHR in 2006 and became a popular performer on the line.  Currently withdrawn for a ‘heavy general’ overhaul, the locomotive’s return to traffic is eagerly awaited.

Produced as a commission for Anything Narrow Gauge and Garden Railway Specialists, the model is also exclusively available through Accucraft U.S. and Argyle Locomotive Works in Australia.  The model is internally gas fired (twin flue, twin superheaters) and is gauge adjustable for either 32mm (‘0’ gauge) or 45mm (‘1’ gauge) – all the parts for this are supplied with the model. This operation can be undertaken by the owner and only takes a few minutes. The cab roof lifts up to give access to the water and lubricator fillers, the gas filler and control are in the bunker. The boiler is fitted with a water gauge and the lubricator has an under floor drain. The model is fitted with slide valves and simplified Walschaerts valve gear and is built from stainless steel, copper and brass.  You can see full details here. 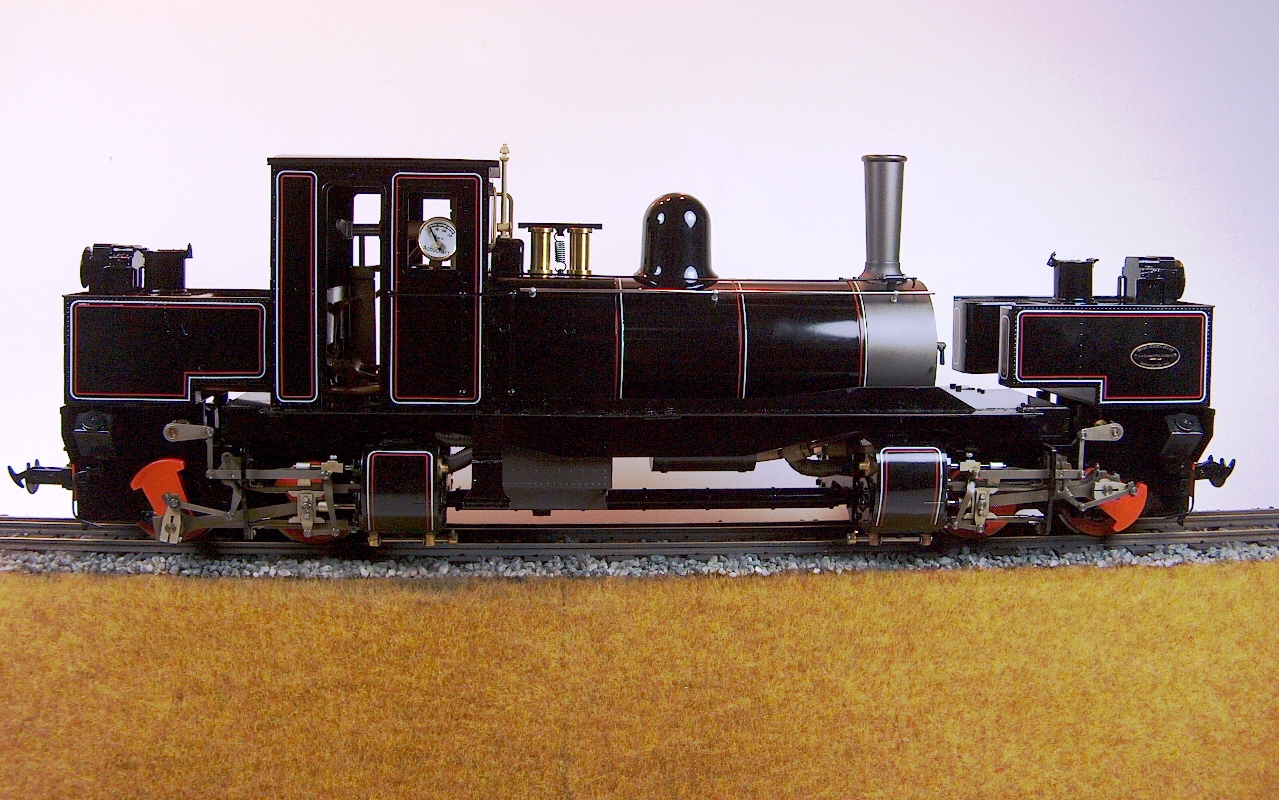 The ‘E’ vans were four-wheeled brake and luggage vans fitted with lookout duckets, but otherwise entirely sealed with only two drop-sash windows at the guard’s door. None of these vans survive today, and they were effectively made redundant when later passenger coaches had their own braking systems. The primary purpose of the ‘E’ van was to provide luggage accommodation and braking for the original ‘A’ – ‘D’ class most of which did not have their own brakes when supplied in 1873/4. One surviving member of the class sat at the end of the Port Erin arrival platform at Douglas for many years and retained its pre-war two-tone brown livery. The Manx Northern Railway owned a pair of similar vans for use with the ‘N’ class carriages, but these seem to have been replaced in the 1890s and then used for goods traffic until they were scrapped in the 1920.

The roof is removable if required for customers to install their own interior detail, for example, or lighting.  An additional set of 32mm wheels is also provided.  Although the models are 1:20.3 scale they look well with 1:19 scale equipment and are probably larger than the equivalent scale models of Talyllyn coaches!  Full details can be viewed here. 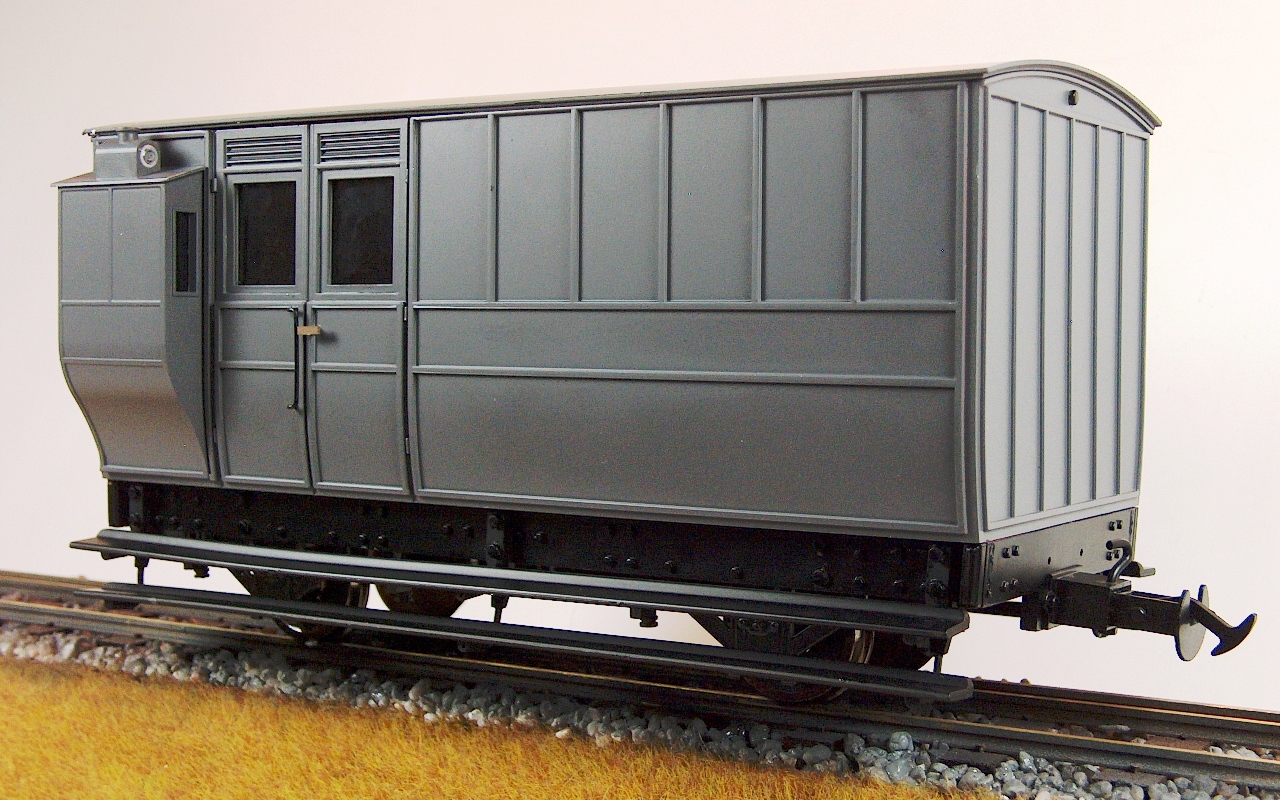 An urgent need for narrow gauge locos to operate the lines behind the trenches in WW1 led the Railways Operating Division (ROD) to source locos from America as well as Britain. Both Baldwin and Alco produced designs and the Baldwin 4-6-0 pannier tank was made in huge numbers. Dispersal sales after the war saw them scattered around the globe with a number ending up in the UK on lines such as the Welsh Highland, Ashover, Snailbeach and Glyn Valley Tramway, many having been acquired by Colonel Stephens for his narrow gauge empire!

The model is internally gas fired and is constructed from etched brass and stainless steel. The model is only available in manual control version. The standard colour is satin black. Versions for 32mm and 45mm gauges are available. As the gas capacity is larger than the water capacity, a boiler top up system will be supplied. The boiler is fitted with a water gauge glass. The locomotive comes fitted with our standard square headed chopper couplings. The wheels are insulated as standard. The cab roof lifts up and tilts sideways to give easy access to the cab interior.  Swift Sixteen make a comprehensive range of WD wagon kits to go with our WW1 locos. You can see full details here. 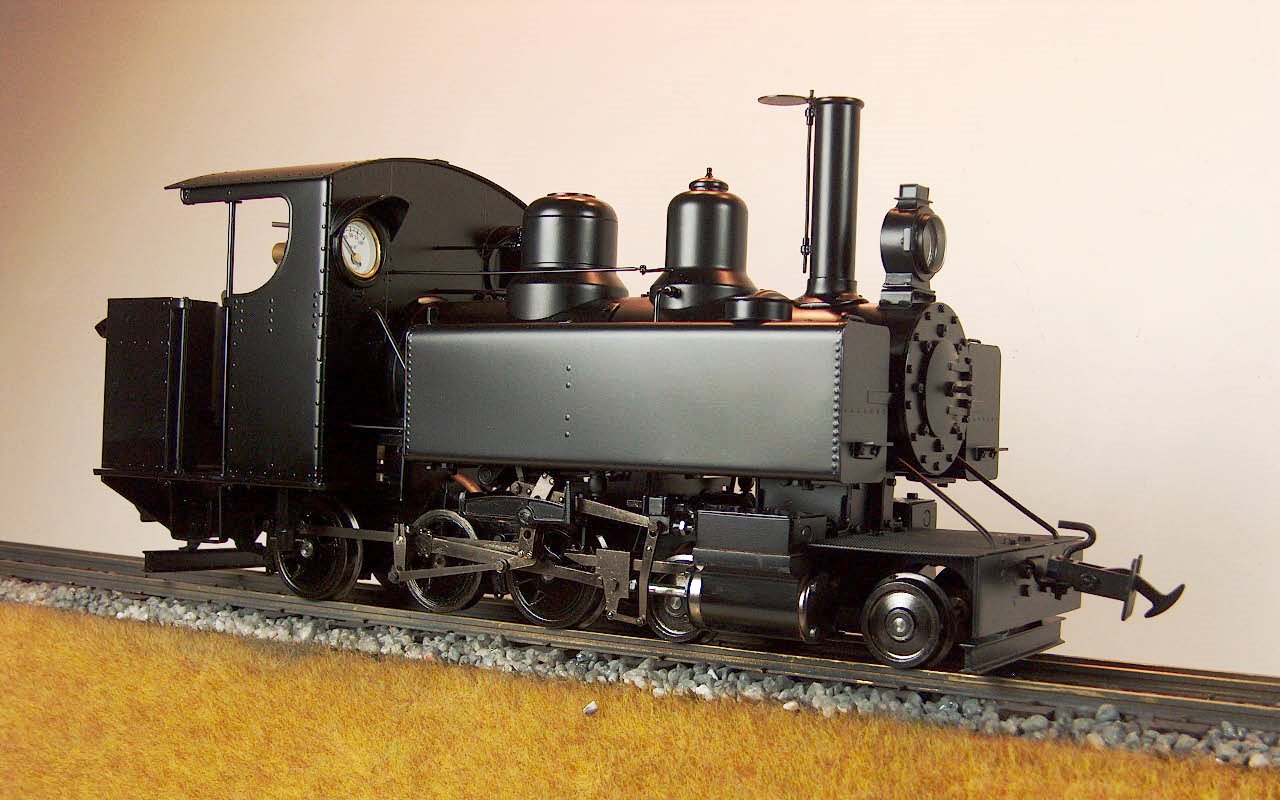