This month we need to notify you of a small problem with some of the 7/8ths” Quarry Hunslets, we also bring you exciting news about 1:32  and 1:20.3 rolling stock as well as focussing on two of our after-market ‘beauty specialists’!

We have been greatly disappointed to discover that some of our customers have experienced difficulties steaming the new Quarry Hunslet. Having had the matter brought to our attention we have conducted rapid investigations on our engineering sample to try to discover where the problem lies. Careful analysis has shown that during the design process we were persuaded to allow for the fitting of DJB automatic drain cocks rather than the smaller, manually operated Accucraft type; this decision meant that the hole for the plug reduced the critical tolerance of the swept volume area in the cylinder and in a small number of cases the piston could over-run the drain and allow the blow-by of steam. The solution is simple but requires the precise centering of the piston in the bore, a job we will happily carry out for anyone who cares to return the loco to us. We’d like to apologise for anyone inconvenienced in this way and will do our best to get the locos returned as speedily as possible.

We would also like apologise for the less than perfect packing which resulted in cosmetic damage to some locos in transit. We will be able to supply replacement parts to those customers who need them and if you have a problem in this area we would be pleased to hear from you.

As ever, Accucraft (UK) stands 100% behind its no quibble guarantee and first recourse in the event of problems should always be to contact us by ‘phone or email before attempting repairs yourself. For our UK customers we will normally arrange to have the loco collected the next working day by our couriers.

Ever since we announced that we intended to make a range of Gauge 1 locomotives we have frequently been asked about rolling stock to go with them.  We are pleased to announce that our first production for this scale will the archetypal Railway Clearing House seven plank wagon.  Based on the 1923 RCH design, our wagon represents a type that was built by the tens of thousands, many them for private owners. 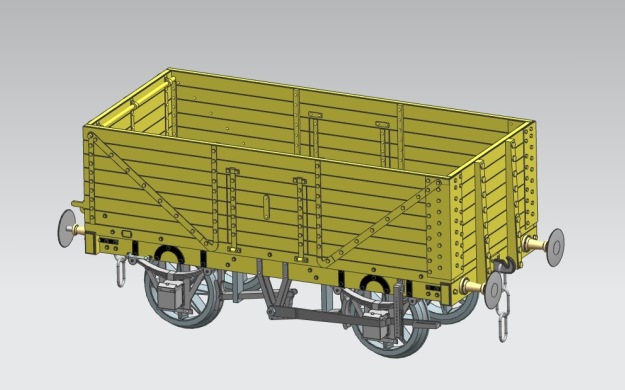 The Railway Clearing House, originally set up by the railway companies to handle charges for vehicles used on another company’s line, introduced standard minimum specifications for private owner wagons. The RCH 12 ton design was the most numerous design of coal wagon built in the UK after 1923. A rugged and simple design employing standard RCH fittings throughout and originally they had to be built with seven side planks. Various configurations of side doors, end door and bottom doors were permitted, but the weight of the unladen wagon was not to be above 7 tons 5 cwt. Oil lubrication and brakes on both sides were mandatory. The main line railway companies adopted RCH fittings for many of their own designs, and the LMS and LNER adopted the RCH 1923 mineral wagon as their standard.

We will be offering the wagon in the liveries of the ‘Big Four’ and in BR grey and Bauxite and will be encouraging our dealers to commission private owners in liveries pertinent to their location or personal whim! We are hoping to bring these wagons to the market with a target UK RRP of £70.00 each.

Introducing an Isle of Man connoisseurs’ range, TrackShack has commissioned Accucraft (UK) to produce the iconic Isle of Man 2 plank ‘M’ wagon. There will be 8 different running numbers, and also a ‘data only’ version for anyone who wants a wagon without the IMR numbering on.  It will noted from the drawings and specification great trouble has been taken to ensure this very accurate model will be quite exquisite. The model features prototypical IMR spoked wheels and scale working IOM couplings and the target RRP is £59.00.

Following production of the open wagons will be a batch of Isle of Man ‘G’ vans in their early form and as later equipped with ‘portholes’.  Again these vehicles will feature an impressive level of detail and will be available in IoM livery and data only forms.  Ideal for Isle of Man enthusiasts or anyone modelling 3′ gauge railways in Great Britain or Ireland.  Contact Trackshack to place an order.

John Lythgoe has been a professional modelmaker since 1973, and a designer of precision photo-chemically etched components for railway modellers since 1995. He started making etched name, number and builders’ plates for garden scale locos in 2005 at the request of modellers who required plates of a standard higher than those readily available at the time. His range now encompasses plates for 1:32 Gauge 1, up to 5″ gauge models.

Gauge 1 modellers will be delighted to discover that he has recently introduced a range of nickel silver smokebox door plates for our little B4 as well as being able to supply the appropriate shed codes. He also produces a selection of 61XX number plates for our forthcoming GWR ‘Prairie’ 2-6-2T – you can see the range here, but more are in preparation, including BR smokebox numbers – BR Western Region shed codes are already available.  Narrow gauge modellers need not feel neglected either, since a  comprehensive range of 16mm scale hardware is also available and John is soon to produce a range of 7/8ths” scale plates suitable for our Quarry Hunslet! 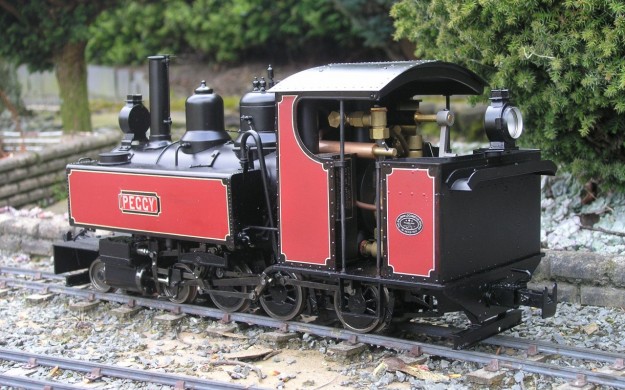 LightLine offers a comprehensive service for lining and finishing 16mm or G scale locomotives. Customers can choose from a wide range of liveries, either prototypical or ‘might have been’.  It is worth visiting their website to see how others have had their locos lined out before taking the plunge.  As well as the examples shown on his website Geoff has dozens of photos you can browse through at leisure. Whatever livery is chosen, the end result will be one you can be proud of and which brings your locomotive to life!