Happy Easter to all our readers!  For April we reveal our Gauge 1 GWR 61XX 2-6-2T, unveil a delightful little 7/8ths” scale Baldwin from Accucraft (US), illustrate a sample of Trackshack’s bauxite L & B wagon and disclose John Boyes’ latest foray into live steam, this time in 1:1 scale on 2′ gauge……

We surprised quite a few people at the Midlands Garden Railway show in March by unveiling the first sample of our new Gauge 1 live steam GWR 61XX.  The model received a lot of praise, representing, as it does, the ‘next step’ up from our B4.  Although there are a few small modifications to make the locos are likely to be available later this year.

The Great Western Railway’s 61XX 2-6-2T design can trace its origins to Churchward’s ground-breaking family of designs produced at the start of the 20th century which included the large ‘prairie’ tank engine number 99.  Ideally suited for suburban and branch line work, thirty-nine more locomotives based on this design were in traffic by 1906 and batches continued to be produced until the class numbered 290.  The first forty (including No. 3100, the renumbered prototype) were absorbed into the 51XX series in the 1927 re-numbering scheme, the additional members of which enjoyed small design improvements under Charles Collett’s supervision.  Having used all the 51XX numbers, further locos were numbered in the 41XX series.  The 61XX variant was introduced in 1931 and was little different from the others apart from boasting a boiler pressure increased to 225psi.  A number of 51XX and 41XX examples have been preserved but only 6106 was saved and this can be found at Didcot, home of the Great Western Society. 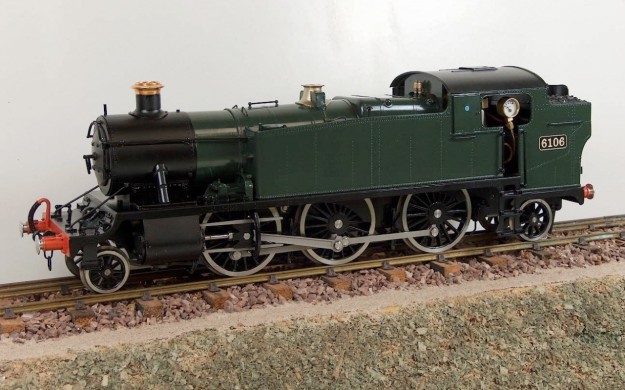 The model is 1:32 scale for 45mm gauge track, gas-fired and has all the features the Gauge 1 fraternity have come to expect from an Accucraft locomotive.  The chassis is constructed from stainless steel, the wheels are uninsulated. The boiler is copper, the cab and bodywork are constructed from etched brass. Like other fine scale models from Accucraft, it will provide many years of enjoyment.  The target RRP is £1650.00.  The model will run round radius 3 curves and is happy on code 332 or code 250 tracks, however, we do not recommend running through LGB code 332 pointwork.  We are aware that there were a large number of livery variations among the class and will therefore be offering fully finished and basic models to allow almost any version to be produced, the latter will be supplied with a selection of number plates to allow the owner to choose their own running number.  You can see the full specification here.

We will be attending the annual show of the 16mm Association again this year and look forward to seeing as many of you there as possible.  With two full size narrow gauge locos, ‘Mountaineer’ from the Ffestiniog and ‘Chaloner’ from the Leighton Buzzard Railway as well as the FR’s precious ‘Topsy’, it promises to be a great event for all large scale modellers.  Tag Gorton will be presenting the prize for the best conversion of an Accucraft power unit (you did enter, didn’t you?) at 11.00am.  Full details of the show and its associated transport links can be found here.

Accucraft (US) has announced production of a delightful 7/8ths” Scale Baldwin, modelled on a little loco that ran in Australia.  The two foot gauge engine was built by Baldwin in1889 as one of three engines imported for use at Fairymead Mill, near Bundaberg.  They followed a standard Baldwin design and had bar-frames, slide valves, a Forney-designed frame for the trailing truck, a large wooden cab and an ornate brass bell on the sand dome.

The three Fairymead Baldwins were withdrawn around 1956 and two were scrapped, however No.1 was saved to be plinthed at Bargara.  In March 1972, Fairymead No.1 was moved to the Goulburn Steam Museum before being privately preserved.   Restoration was completed in 1993 and steam trials were held before the loco moved to the Lake Macquarie Light Railway, a private 2′ railway near Toronto.

The model follows normal Accucraft construction, being made of copper, brass and stainless steel.  It is set to 45mm gauge and is butane fired with Stephenson valve gear, slide valves and working cylinder drain cocks.  Two versions will be available, one beautifully painted in Baldwin’s factory finish, green cab and fittings, Russian Iron boiler and red oxide cab roof, the other in a simple black livery.

Any colour you like, as long as it’s bauxite!

Trackshack has commissioned a version of almost all our 1:19 scale freight rolling stock in bauxite livery.  This bright red/brown colour was used by both the LNER and BR for wagons and vans and very attractive it looks too!  We are able to illustrate our Lynton & Barnstaple Railway four-wheel open wagon carrying this livery to show how it will look. 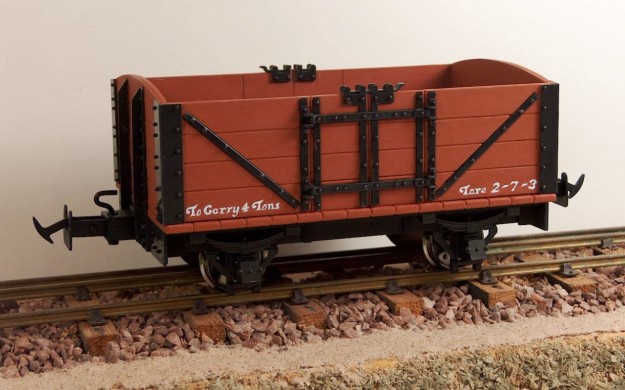 While mentioning Trackshack, we must thank John Boyes of that firm for inviting us to Alan Keef Engineering near Ross on Wye to witness the unveiling of the Groudle Glen Railway’s latest motive power.  In the early years of the 16mm Association we often saw curious locos built from Mamod and Meccano components sporting single cylinders, flywheels, gears and even chain drives; well, with the help of Keef Engineering, John and his GGR team have scaled the process up and created a ‘Steamplex’ utilising components from a Simplex diesel, a single-cylinder steam ‘motor’, gearbox, chain-drive and vertical boiler!  The result is a surprisingly gutsy little locomotive which is uniquely challenging to drive!  Expect to see this incredible machine in action on the Isle of Man this summer.  As yet unnamed, there is a move to christen it ‘Bubble & Squeak’…….. 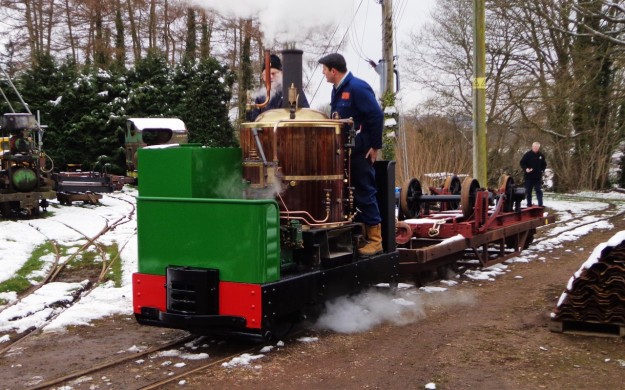