Happy Christmas to all our customers!  This month we have news of an alternative livery for ‘Lew’, developments with ‘Peveril’ and the Baguley Drewery diesels and, for those with large Gauge 1 lines, two incredible American locos to straighten your curves!

‘LEW’ IN THE BLACK

Having had a number of requests, we have decided to produce ‘Lew’ in limited numbers in plain black with no lettering or numbers.  This will allow individuals to apply their own livery or maybe “SOUTHERN” in sunshine lettering or fully lined B.R. livery for those who have a yearning to see how the railway would have looked had it been nationalised.  The first batch has been completely pre-sold and will only be shipped in Southern green so the black ‘uns will follow with the second batch which is likely to appear in November 2012.  Please order part number S19-18 from your local retailer if you would like an example of ‘Lew’ in plain black.

‘PEVERIL’ – TO BE AVAILABLE IN RADIO CONTROL FORM

With the batch of Baguley Drewry diesels in the final stages of production we can illustrate some of the lovely new liveries. The all-metal chassis model will be available in black, red, yellow, green and blue.  Forward orders have already been strong for these so make sure you have one reserved from the initial batch.  The chassis will also be available in the same red-framed format. 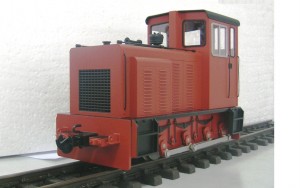 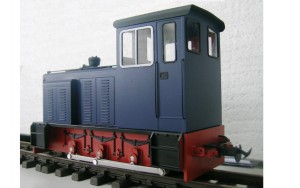 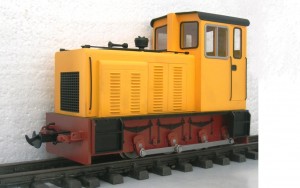 May we remind you that the closing date for our self-build competition is 31st December, we have already had some interesting entries and the standard is very high.  You can see the current contenders here. Models must be based on the ‘Lawley’ or ‘Ragleth/Edrig’ power units and will be judged by Tag Gorton of Garden Rail magazine with the winners being given their prizes at the 16mm Association Show in April. The rules are available here ACCUCRAFT POWER UNIT COMPETITION

For those of you with large stockings (and equally large gardens!), we thought we’d showcase a couple of outstanding new 1:32 scale models due out next year.  First up is the mighty Pennsylvania T1. The Pennsylvania Railroad’s 4-4-4-4 Class T1 passenger locomotives were their last steam locos. They were not articulated, but were Duplex drive and had poppet valves. The first two, #6110 and #6111, were built by Baldwin in 1942. These locomotives were considered successful and could pull 16 cars at 100 MPH. They were also technically advanced and more efficient than previous designs. Later, 50 more of these were built in 1945-46 for a total of 52. The large tenders carried 38.6 tons of coal, 19,200 gallons of water and could travel between Harrisburg, Pennsylvania and Chicago, Illinois with only one stop. The streamline design by Raymond Lowey was the inspiration for the Baldwin Lima “Shark Nose” diesels.

The model is 1:32 Scale, 45mm Gauge, spirit-fired and has four cylinders with slide valves.  The boiler is rated at 60PSI and has a working pressure gauge, water level gauge, axle water pump with a bypass valve and a hand water pump located in the tender.  The loco is also fitted with a lubricator. Minimum radius 10′, you can see the full specification here. RRP £5350.00

Next up is the incredible Chesapeake & Ohio H8 Allegheny 2-6-6-6.  The debate as to which is the largest steam locomotive ever built goes on to this day. It has always been between Union Pacific’s Big Boy and the C&O Allegheny. How can a 4-8-8-4 weigh less than a 2-6-6-6? The answer may come from the fact that the Allegheny’s boiler is a bit larger than the Big Boy! The listed figure of weight on the Allegheny is 724,500 lbs however this figure goes as high as 778,000lbs on engines 1600-1609 for the 1941 Lima built locomotives. The general published weight on the Big Boy is 772,250 lbs. Since the Allegheny produced 7,498 horsepower compared to 6,900 for the Big Boy, the race for the biggest and most powerful starts to lean toward the Allegheny. However the jury is still out on this subject, and it’s safe to say that both machines were awesome, and represent the pinnacle of steam locomotive development in North America.