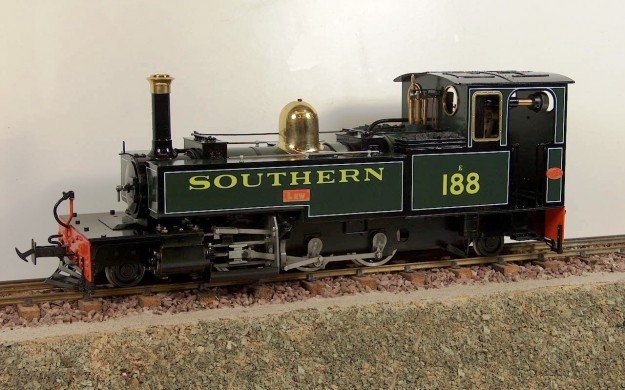 Lew was built in 1925 to a similar design to the previous Manning Wardle locomotives constructed for the Lynton & Barnstaple Railway, the main difference being a redesigned cab to eliminate a smoke trap, and give more room to the crew.  Following the L & B tradition, she was named after one of the local rivers with a three-letter name. She was sold at auction along with other L&B equipment in November 1935, two months after the railway closed.  However, she was purchased by the contractor dismantling the line and was used on these trains until July 1936.  In September 1936, the loco sailed from Britain on the SS Sabor – believed to have been destined for a plantation in Brazil. Despite the efforts of many enthusiasts, no proof of the locomotive’s current whereabouts, or eventual fate has been discovered.  The Ffestiniog Railway has recently completed a replica of the loco and christened it ‘Lyd’, thus continuing the tradition of three-letter river names and we are pleased to say that in association with the F.R. we will be producing a limited edition of this loco as well, details of which can be found here.

The model is internally gas fired and available either manually controlled or fitted with radio control. The engine is gauge adjustable for either 32mm (‘0’ gauge) or 45mm (‘1’ gauge) – all the parts for this are supplied with the model. This operation can be undertaken by the owner and only takes a few minutes. The loco is supplied with blanking plates for the cut-outs in the frames but these are really for display only, severely restricting the choice of track curvature if used in operation. The cab roof lifts up to give access to the gas, water and lubricator fillers. The boiler is fitted with a water level check valve and the lubricator has an under floor drain. The model is fitted with slide valves. With the initial batch the cylinders were drilled, tapped and plugged to accept DJB Engineering’s Accucraft automatic drain cocks – the second batch was produced without this feature. The wheels are spoked, the drivers are insulated and insulated pony wheels are available on request.  The model is built from stainless steel and brass, and with the correct maintenance, will give a lifetime of pleasure.

Chris Bird has produced three extremely useful ‘how to’ videos covering gauge changing, preparation and steaming of ‘Lew’, these are recommended viewing for anyone purchasing this locomotive.  The last video covers the fitting and use of one of his Summerlands ‘chuffers’.

The other videos can be seen here and here.