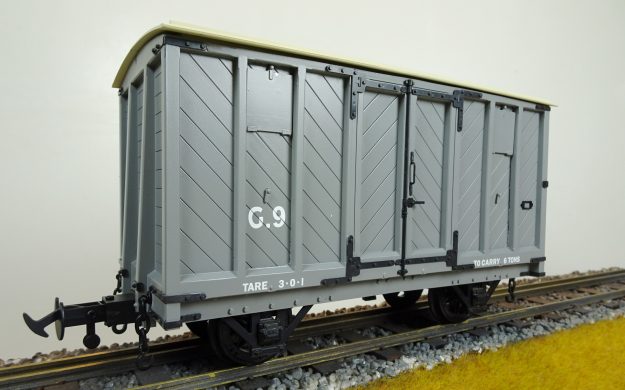 The Isle of Man Railway inherited four covered ventilated vans of a different design from the Manx Northern Railway in 1904 and built a further five longer-body examples itself between 1915 and 1921 using  redundant chassis from original 4-wheel carriage stock.  The portholes on the side panels of a number of “G” vans were modifications by the Railway to improve ventilation for carrying perishable goods, live poultry and even horses!  Numbers G4, G6, G7, G9 available.  Additionally this G van with portholes is being made in plain grey ‘data only’ for anyone who wants it for non Isle of Man purposes.  Body length is 217.5mm, overall maximum width over the handles 107mm, height 134.5mm

Note: These vans are supplied with metal shutters and catches loose.  These can be fitted in the open position, with the catch above the porthole, or in the closed position, with the catch fitted below the porthole.  Twin epoxy or similar glue is recommended – avoid solvent glues which might damage the paintwork.  Check the product images to see how they should be. The vans are supplied with our standard chopper couplings, set at 25mm above rail level to meet 16mm scale standards but the models are fitted with a higher set of bolt holes to allow the couplings to match the Isle of Man locomotives. The vans are also supplied with a set of 32mm gauge wheels for those who wish to convert the vehicles to O Gauge.