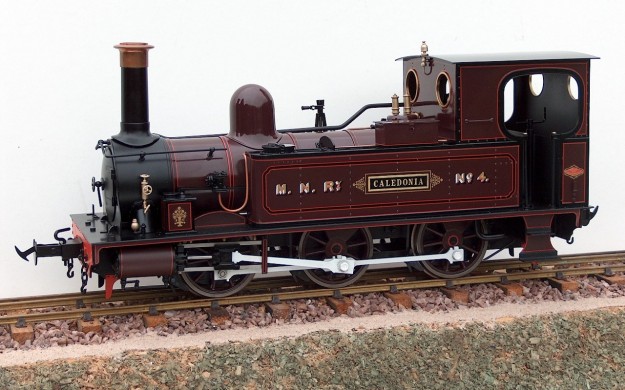 Caledonia was built in 1885 by Dubs & Co. for the 3′ gauge Manx Northern Railway.  The M.N.R. needed a powerful loco for working coal trains on the Foxdale branch.  In 1895 she was shipped by sea to Laxey to work on the construction of the Snaefell Mountain Railway.  In 1904 the M.N.R. was absorbed by the Isle of Man Railway Co. who found a variety of uses for her including working to the internees’ camp in Peel during WW1 and for various contractors employed in public works, as well as market day cattle trains and snow-ploughing.

This model is based on No 15 ‘Caledonia’ as now running on the Isle of Man Railway.  Versions are available based on ‘Caledonia’ as Manx Northern No 4 in Tuscan Red as running in 2008, as No. 15 in blue livery or as a plain unlined red version. The model is electrically powered and has a 0-24 volt gear head motor.

Posted on Thursday, 12th May 2011 by Accucraft UK Ltd
Bookmark the permalink.