The current hiatus affecting worldwide shipping and the closure of Shanghai’s principal airport because of Covid-19 is throwing up some particular challenges for our business, compromising both the supply of parts and the delivery of finished products.  There may be some adjustment to the order in which we deliver future projects and we would ask for your indulgence while we try to resolve these issues.

Although the project got knocked back by the pandemic, progress continues to be made with our forthcoming ‘Lawley’. The museum quality model is internally gas fired and is gauge adjustable for either 32mm (‘0’ gauge) or 45mm (‘1’ gauge) – all the parts for this are supplied with the model. This operation can be undertaken by the owner and only takes a few minutes. The cab roof lifts up to give access to the water filler. The boiler is fitted with a water gauge, pressure gauge and the gas tank is in a water bath in the tender (which also has a dry space for fitting radio control). The model is fitted with slide valves, functioning Stephenson valve gear and is built from stainless steel, copper and brass. Estimated UK RRP £2950.00 inc. VAT – don’t miss the pre-order price!

Revisions during the design stage have included the provision of a single-skinned roof only, sliding cabside louvres, twin lubricators and the decision to produce the headlamps as an after-market accessory.

Research has shown that the SAR green livery is close enough to justify using the same colour as that which we applied to our Lynton & Barnstaple locomotives and it would not be too great a stretch of the imagination to envisage one of these plying its trade in North Devon!

The images above show the final refinements to the design prior to construction commencing. There will be plenty of room in the cab to allow the fitting of radio control. The cabside louvres can be slid far enough back to be removed completely if the operator wishes the locomotive to have a more British appearance.

The Lynton & Barnstaple Brake Composite coaches are now in stock. This is a very small, one-time production run and individual brakes will only be available with one other type of coach, either R19-19/20/20. The UK RRP for the brake composites is currently £175.00, the other coaches remain at £150.00, so, £325.00 for a pair. Please place your orders (plus choice of additional coaches) as soon as possible to avoid disappointment. Please note that this price is only applicable to the current UK stock since the escalation in shipping costs is bound to push up the RRP of any further supplies from the factory.

We are pleased to say that we have also just taken delivery of more Isle of Man ‘Pairs’ coaches. However, the prices only apply to current stock, future deliveries will see these rise. The coaches are supplied with both 45mm and 32mm gauge wheelsets which are easily changed. Make sure you get your order in now! 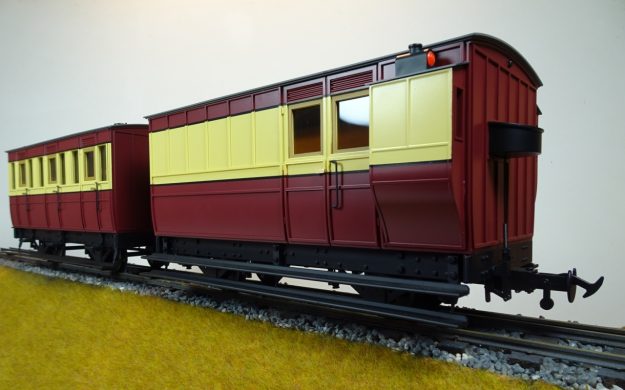 We have a small number of Aster locomotives left in stock.  These may be the only ones available in the UK for quite a while so don’t delay if you’d like one!

The Gauge 1 Pullmans are based on the monocoque K-Type steel-sided stock introduced in the late 1920s. A total of 33 K-Type Pullman cars were built with the first batch of 20 cars destined for LNER and the newly branded Queen of Scots and West Riding Pullman trains in July 1928. A further nine first-class vehicles were supplied the following year for the GWR with the launch of the Torbay Pullman Limited and the Plymouth Ocean Liner Specials.

At the end of the short-lived GWR experiment, this set of Pullman cars was transferred to Southern metals for Southampton Ocean Liner Specials and the new Bournemouth Belle service which commenced operation on 8 July 1931. A further four third-class Pullman cars based on the 1928 designs were added to the Bournemouth Belle service. Up until WW2 Southampton Ocean Liner Specials were generally made up of three to four Pullman cars (without parlour brakes) together with an assortment of other Southern carriage stock and luggage vans.

Gauge 1 Pullmans will be produced to echo the pre-nationalisation period of the 1930s and 40s and the BR era when new Pullman services were introduced.  Pullmans will be produced in standard umber and cream livery and come with grey roofs. The pre-nationalisation stock will incorporate the original Pullman emblem and third-class vehicle designation; they will look fabulous hauled by the new Aster P2 locomotive. The BR Pullmans will come with the new simplified Pullman insignia, revised lining, and car no. designation.

In addition, we will consider producing a special range of Pullman Bar Cars if there is sufficient interest.

Only four of the original K-Type cars were ever built as third-class parlour brakes – none as first-class parlour brakes. However, six of the original K-Type third-class kitchen cars nos. 67-72 were later converted into parlour brake cars and these form an additional BR period Pullman brake offering. The rebuilt parlour brakes are different to the original set cars nos. 77-80 built for Queen of Scots’ running. The differences include revised roof layout at luggage end, smaller drop windows on either side of the guard’s luggage area, no roof brackets as carriage boards moved to the cantrail at brake car ends and revised light fitting above guard’s door. They were of a more modern appearance.

Whilst there was always a degree of fluidity over how Pullman cars were allocated to specific regions and services, named and numbered Pullman cars without suffixes largely operated on east coast routes with the Queen of Scots and West Riding Pullman etc.

All Pullman cars come in umber and cream livery with grey roofs.