Welcome to the Accucraft (UK) august update.  After a slight lull we have plenty for you this month, the good news is that we have announced a new, Gauge 1, 1:32 scale locomotive to follow on from the very successful Adams Radial Tank and a new date for our cancelled Spring warehouse sale.  The bad news is that the latter is now an urgent priority since we are going to have to quit these premises by November!  Anyway, read on for full details….

The model is built to1:32 scale for 45mm gauge track, gas-fired with a single flue boiler.  Built to a similar formula as our very successful 61XX 2-6-2T, the chassis is constructed from stainless steel, the wheels are un-insulated. The boiler is copper, the cab and bodywork are constructed from etched brass. The gas tank is in a water bath in the tender.  The model will run round 4′ 6″ radius curves and we are aware that there were a large number of livery variations among members of the class and will therefore be offering the variants subject to order volume. We’d like to thank David Fletcher for the marvellous drawings he has produced of this useful locomotive. You can see full details here.

We know many of you were disappointed that we had to scratch our Spring Sale and open day due to the Covid-19 outbreak and we are now planning to have a sale during the last week in September, now made more urgent by the need to leave the premises we currently occupy!  It is proposed that the sale will held on the basis of individual 30 minute pre-booked appointments which will allow individuals to safely browse the stock being offered and make their purchases in a controlled Covid-19 secure atmosphere (subject to the restrictions in place at the time).  Given that much of the stock consists of ‘open box’ items, show stock (complete with travel boxes in most instances), ‘end of line’ items and original prototypes, it will be sold ‘as seen’ and we will be unable to publish a complete list of all that will be on offer but the image below gives an idea of some of those items available.  We will publish a schedule of appointments in the next bulletin – given the boxes available this will be for collection only.

“It never rains but it pours!”

As alluded to above, if the Covid-19 epidemic wasn’t enough, we need to vacate our current industrial unit to allow our landlord to make much-needed and long-overdue repairs to the valley gutter between the two roofs of the building.  Many of you will be aware that we have occasionally had water-damaged stock for sale, now you know why!  We will therefore be moving into new offices and putting the stock in temporary storage, one consequence of which will be an inability to remain open for visitors although we will continue to supply goods by courier.  The office move will probably occur during October and Unit 4 will be closed as of 31st of that month.  Naturally our ‘phone number will remain the same, as will our email address!  Please bear with us during this process!

We need to remind you that the gorgeous CIWL cars being hand-made at the factory are a limited run and are selling well.  These splendid coaches, complete with detailed interiors and lighting, form the first part of a batch that will eventually enable the customer to assemble a complete ‘Train Bleu’ consist, including dining car and fourgon vehicles – if you wish to assemble such a train you need to act quickly to avoid missing out on these sleepers.  UK RRP £950.00 per car, £3610.00 for a set of four individually numbered cars. 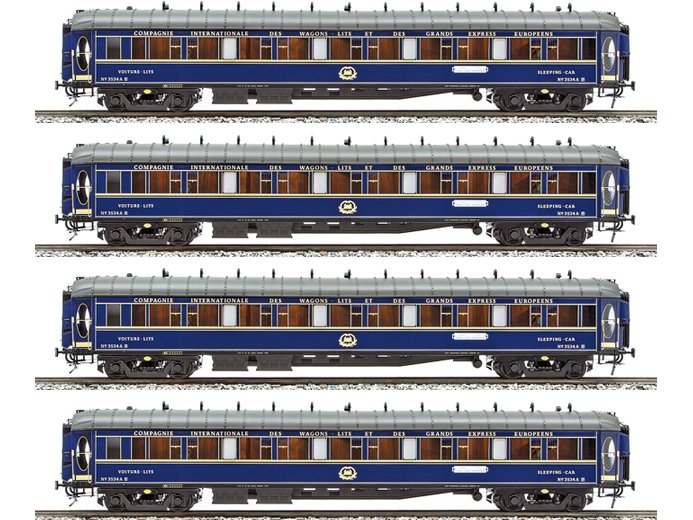