Welcome to our July newsletter.  This month we bring you news of Ian and Sandy Pearse’s retirement from the business and plans for the company’s future as well as an update on the arrival of the Mk1 coaches and a final plug for ‘Tracks to the Trenches’.  We also list unsold sale items that were offered at our open day.

After spending many of his formative years involved in the narrow gauge preservation scene, Ian Pearse has enjoyed nearly 40 years experience in garden railways, initially with Merlin Models and then Pearse Locomotives, the company founded in 1992 by Ian and his wife, Sandy. The couple sold the business to Mike Teece in 1997 when Ian acquired the trade agency for his area for Bachmann Europe but exposure to an Accucraft ‘Ruby’ led to the distribution of Accucraft products in the UK.  To facilitate this, Ian and Sandy started a new business in 2000, Marches Models, best known for supplying British narrow gauge live steam locomotives for gauges ‘O’ and ’1′.  Accucraft UK Ltd was formed in 2004 and quickly developed a strong relationship with Accucraft Trains in the USA.  Accucraft UK Ltd expanded to offer electrically-powered models and ready-to-run plastic rolling stock in 1:32, 1:20.3, 1:19 and 1:13.7 scales, significantly growing the range of large scale model railway goods available to the UK and worldwide market.

In 2015 the firm acquired the intellectual property, designs and tooling of the Gauge 1 Model Co. expanding the existing range of superb Gauge 1 rolling stock and adding to the fleet of locomotive designs.  The company is also the sole UK importer for the complete range of products manufactured by Accucraft Trains of the USA as well as the models made for Accucraft Australia (Argyle Models) and Accucraft Germany (MBV Schug).

In 2013 Graham Langer joined the company (having worked part-time for Ian for some years) allowing Ian and Sandy to take more of a back seat role, a process that continued when the business was moved to Herefordshire three years ago so that Graham could run the office full-time.  Now in their 65th year, both Ian and Sandy have decided to retire from the front-line business although both will remain directors of the company with Ian keeping a watching brief over design.  Graham Langer has been appointed managing director of Accucraft UK Ltd. as of 1st July.

Graham has been involved in small scale live steam most of his life (his father was a model engineer), joining the 16mm Association in 1977 when he acquired his first Archangel locomotive.  He has also been associated with the preservation movement, initially at the fledgling K&ESR from 1971 and then with the de Glehn compound, Nord 3.628, when she was based at Peterborough.  Drawn to mainline steam, Graham has been involved with The A1 Steam Locomotive Trust for nearly 20 years; part of the administration team for over 10 years, he is now a director and trustee of that organisation. 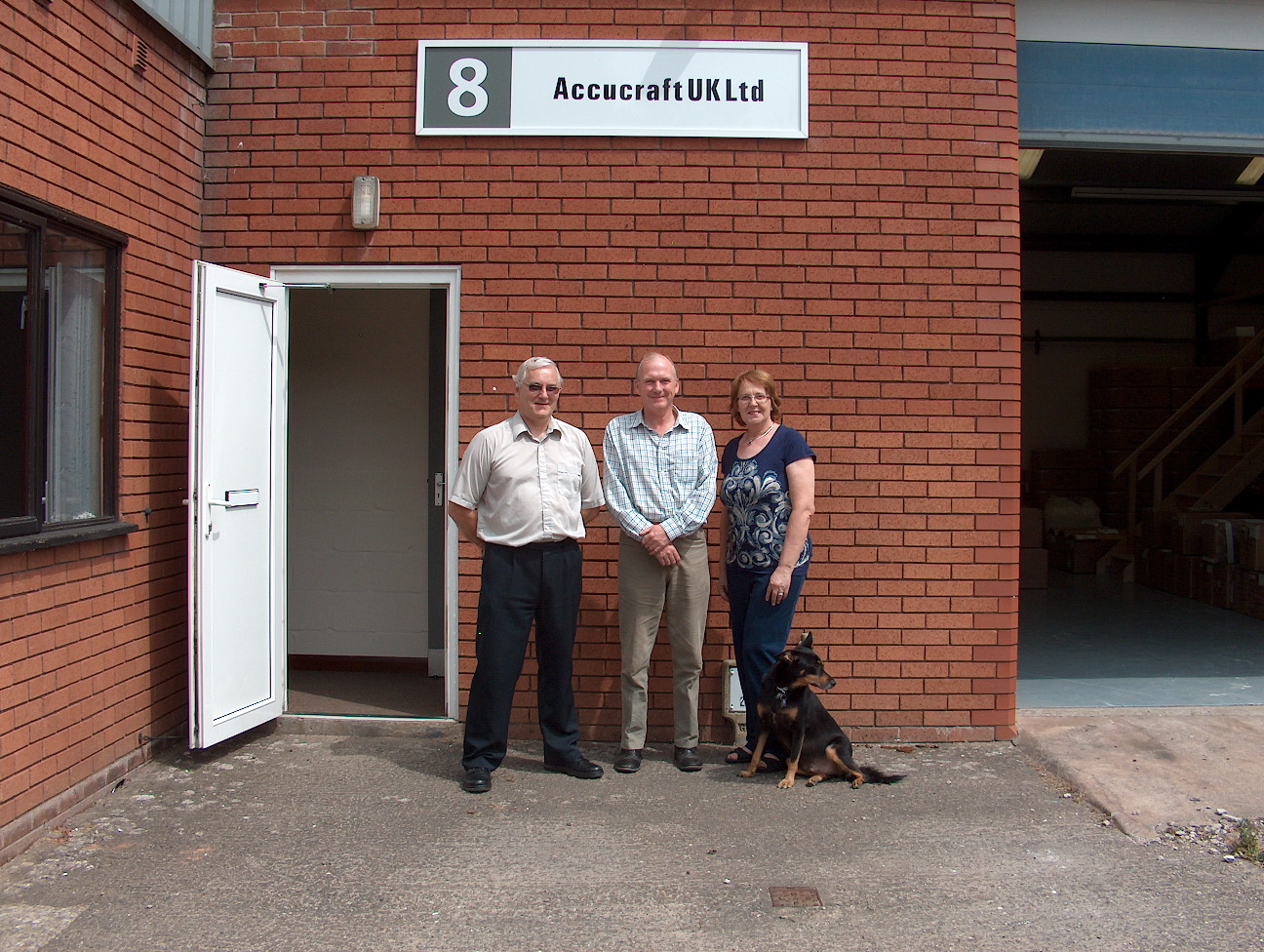 Ian and Sandy’s decision to retire coincides with a general re-structuring of the UK business.  With the acquisition of Aster’s production the factory has never been busier and in consequence, following the delivery of Trackshack’s IoM railcar, the company will no longer be undertaking any outside commission work, concentrating instead on expanding its own offerings and improving the range.  With the reduction in the number of garden railway retailers in the area we also took the decision to open the Pontrilas unit as a shop and now have a display area and test track available for anyone passing by (although a ‘phone call or email beforehand is wise).

We are disappointed to say that the long-anticipated arrival of the next batch of Mk1 coaches has been delayed by a problem at Felixstowe.  Due to have reached us on 26th June, the vessel with the consignment has had to stand off in the North Sea while the terminal deals with a computer problem and the resultant chaos and backlog.  The latest ETA is 6th July which means we should have them with dealers w/c 9th July.  We apologise for this delay which was way beyond our control!

Full size and 1:19 scale debutants at Tracks to the Trenches!

It is our ambition to unveil our 1:19 scale model at Apedale at ‘Tracks to the Trenches’, allowing a direct comparison with the full size locomotive which will be making its first public appearance in steam.  Unfortunately the War Office Loco Trust’s Hunslet 4-6-0T was, very sadly, unable to participate in the Hunslet 125 weekend at the Ffestiniog Railway. As is often the case when dealing with vintage machinery, there just weren’t hours in the day to complete the loco.

However, the team restoring the locomotive is confident that the locomotive will be available to play an active role at ‘Tracks to the Trenches’ at Apedale, on July 13th – 15th. Barring major mechanical setbacks, the weekend will see the public debut of this iconic loco, and a chance for visitors to see four of the key British military locomotives of the First World War all in operation together for the first time (probably) since the 1920’s with authentic First World War rolling stock– the Hunslet 4-6-0T LR 303, the Greensand Museum Trust’s (10-12-D) Baldwin 4-6-0T  LR 778 from Leighton Buzzard, Kerr Stuart ‘Joffre’ 0-6-0T 3014 and the Apedale resident Hudswell Clarke 0-6-0WT loco LR 104. This is a spectacle that is unlikely to be repeated anywhere for many years!  You can find full details of the event here. 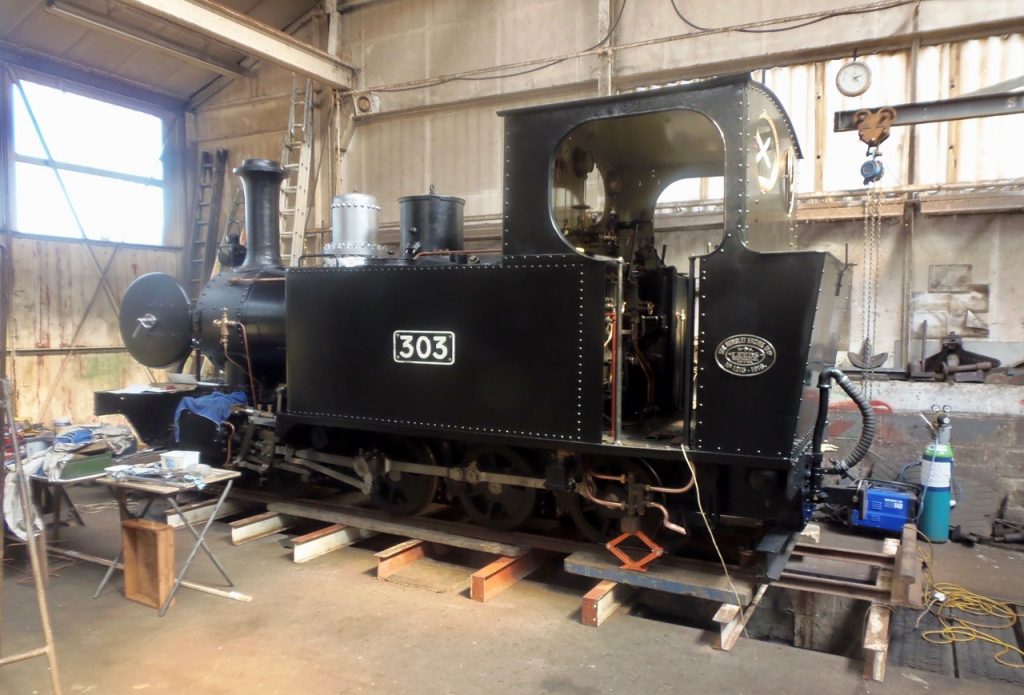 We had a great open day on 16th June and hope that all those who attended enjoyed themselves as well.  We still have some bargains left if you missed out so email us or ring us if you would like any of the following ‘open box’ items: