Welcome to our August newsletter.  This month we bring two important news stories.  Firstly we have been appointed Aster-Accucraft dealers and secondly the production prototype of the WD Hunslet broke cover at this year’s very successful ‘Tracks to the Trenches’ event in July.

Accucraft UK, in association with Accucraft Trains, has a track record of producing high-quality British outline locomotives and rolling stock for the Gauge 1 market, as well as distributing the US range and the products of Accucraft (DE) and Accucraft (AUS) in the UK.  The acquisition of the Gauge 1 Model Company’s range further expanded the company’s commitment to 1:32 scale, bringing affordable, ready-to-run rolling stock to the market.

As a consequence of the new collaboration between Aster Hobby Co. Inc. (Japan) and Accucraft Trains (USA), we are delighted to announce that we have also been appointed Aster-Accucraft dealers for the UK, further enhancing the range of products we can offer our customers.  Aster Hobby needs no introduction, their locomotives are often regarded as the bench mark for 1:32 live steam and the recent release of a batch of 9Fs is the first co-operative project between Aster Hobby and Accucraft Trains. Aster’s experience and expertise in producing the finest kit models has been combined with Accucraft’s component manufacturing and production skills to produce the Aster-Accucraft BR 9F. Like all Aster models it was offered in both kit form and as a fully assembled, ready to run model and has been well-received by the Gauge 1 community.

We are pleased to say that Aster Hobbies (UK) has now joined the ranks of Accucraft dealers will now be able to offer its customers the Accucraft UK range as well.  Aster-Accucraft products will only be available direct from Accucraft (UK) Ltd.

Due for release shortly will be an up-graded version of the Light Mikado.  The original Aster Light Mikado was produced in 1999 and was offered in a basic version with available upgrades (see the Accucraft US website for a list of new features that have been added to this new updated design). Production quantity will be limited to 60 units and it will be available in both unlettered and ‘road-named’ versions.  This is a powerful and easily constructed kit based on one of Aster Hobby Co’s most successful designs for the North American market.  The USRA Mikados are perfect to accompany the Accucraft US range of 1:32 rolling stock – please enquire about current availability.  You can find full details of the Aster-Accucraft Light Mikado here.

The USRA light Mikado will be followed in October by a short re-run of the BR Standard class 5MT. This new version will now feature a high-sided BR 1C tender and will be available in both lined black and lined green liveries. Kits from Accucraft (UK) Ltd. will be unlettered and without emblem/crest for your choice (decals included). Ready to Run models will represent preserved No. 73096 in lined green and the Bluebell Railway’s No. 73082 Camelot in lined black.  Aster Hobby Co only made 170 units back in 2010 allowing for a further run; with the high-sided tender the model is perfect for representing the British Railways Southern Region ‘Arthurs’ which acquired the the names of scrapped Southern Railway N15 ‘King Arthurs’ (the Southern Region examples required high capacity tenders because of the lack of water troughs in the region).  The 5MT will be an ideal companion for the Accucraft UK range of Gauge 1 (1:32 scale) rolling stock.

Finally, for the close of 2018 we anticipate the release of a batch of the new USRA heavy Mikado. This model will share many of the same improved features as the Light Mikado but with the larger boiler casing, larger smokebox and cab of the Heavy Mikado. Production quantity limited to 160 units.

There are still a few Aster-Accucraft BR 9Fs available, please enquire about availability.  The British Railways BR Standard Class 9F 2-10-0 was designed for British Railways by Robert Riddles for use on fast, heavy freight trains over long distances. The total number built was 251. The last of the class, 92220 ‘Evening Star’, was the final steam locomotive to be built by British Railways, in 1960. Withdrawals began in 1964, with the final locomotives removed from service in 1968. Several examples have survived into the preservation.

This is the first co-operative project between Aster Hobby Co. Inc. (Japan) and Accucraft Trains (USA). Aster’s experience and expertise in producing the finest kit models has been combined with Accucraft’s component manufacturing and production skills to produce the Aster-Accucraft BR 9F. This model is offered in both kit form and as a fully assembled, ready to run model. As a kit, the components are fully painted and detailed (according to the version offered), all machining is done, and the boiler is fully assembled and pressure tested.  You can find full details here.

Double debut at ‘Tracks to the Trenches’!

We managed to effect a ‘double debut’ at this year’s hugely successful ‘Tracks to the Trenches’ event at Apedale last month.  Alongside the War Department Locomotive Trust’s WD Hunslet No. 303 making its first public passenger carrying runs, we unveiled our own, 1:19 scale model of the class and were able to display the two together.  We are grateful to the WDLT for their assistance in creating the 16mm scale version and a percentage of the retail profit from the sale of these will be donated to the Trust.  The image shows Ian Hughes of the WDLT, Graham Langer (Accucraft UK) and No. 303 – both large and small!  A percentage of the retail profit from each UK sale will be donated to this locomotive, a greater percentage if ordered directly from us, Accucraft (UK) Ltd.  You can find full details of the model here but don’t delay ordering one, there are only a handful left available. 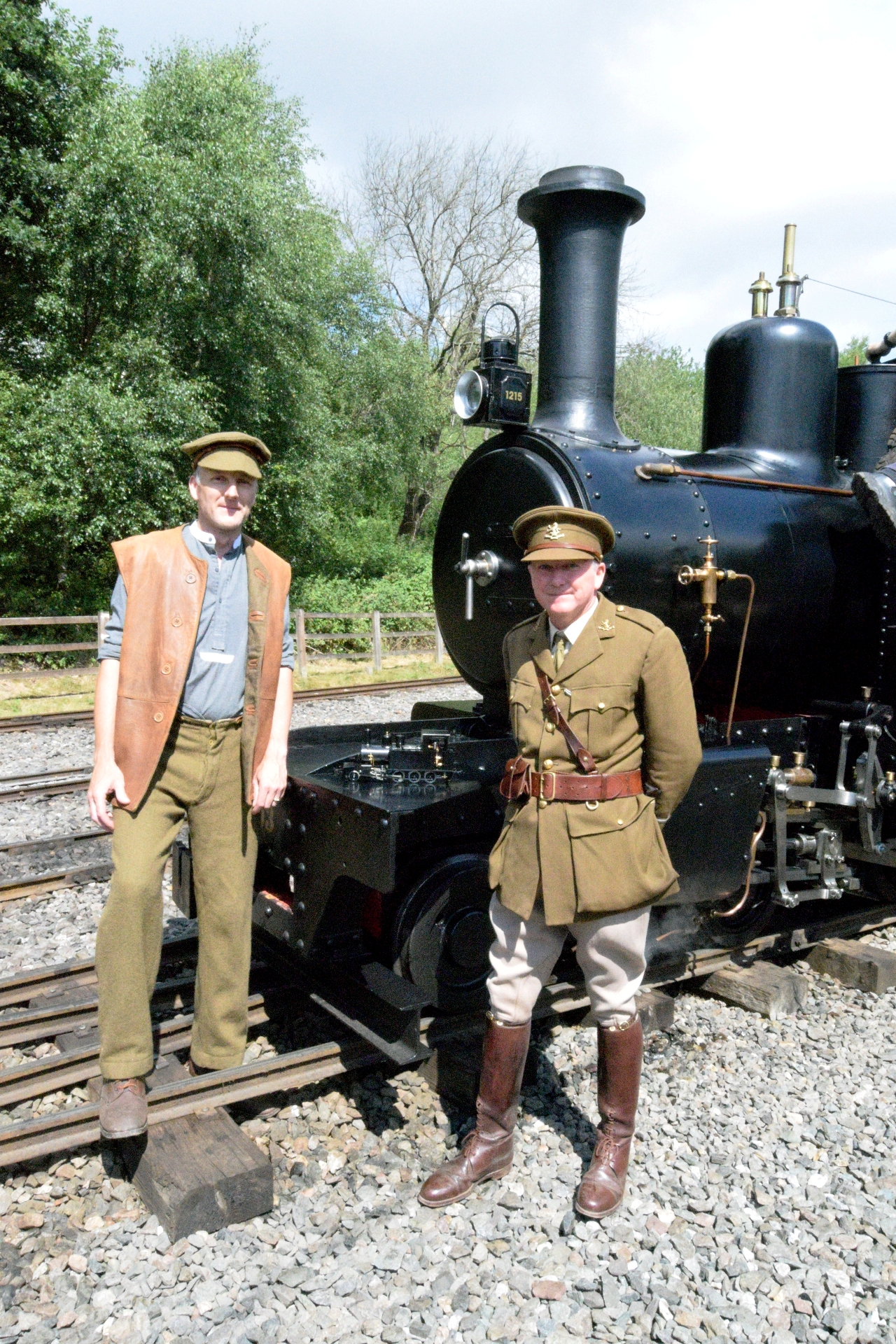 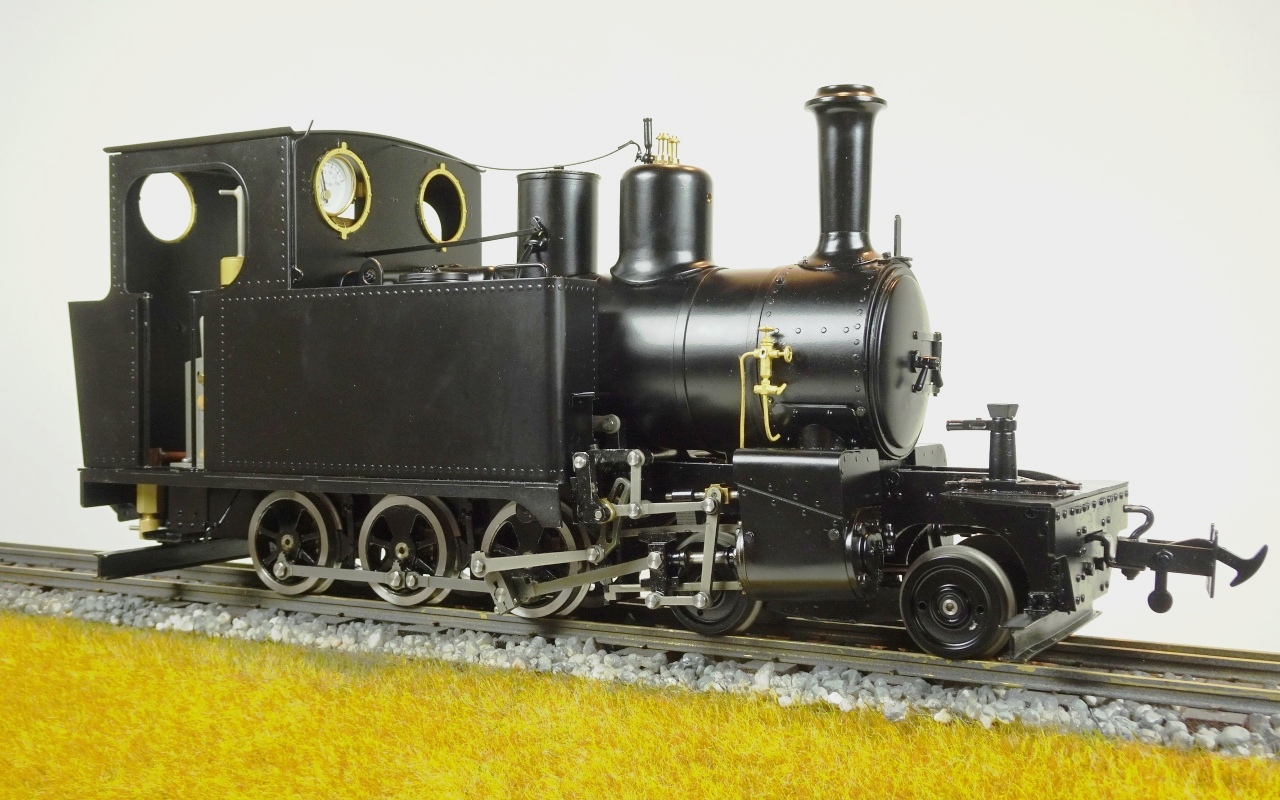