This month we are able to bring you a breaking story from Australia, including the announcement of two new 1:32 scale live steam engines.  From Accucraft (US) we have word of another coal-fired D&RGW locomotive in production.

Exciting news from ‘down under’

Following the successful production and imminent delivery of the Victorian Railways NA Class 2-6-2T, Michael Ragg and Gordon Watson of Argyle Loco Works have formed Accucraft (Australia) to develop a range of live steam and electric models based on Australian prototypes.  This range will be made available exclusively through Accucraft (US) and Accucraft (UK) in the same way in which the NA was brought to the market in these countries.  Not letting the grass grow under their feet, Accucraft (AUS) have announced not one but two new models in 1:32 scale.  Michael Ragg picks up the story, “The formation of ‘Accucraft Australia’ has been a gradual evolution since its origins in the early 1990’s when Argyle Locomotive Works was established as a bespoke and batch builder of steam locomotives in gauges ‘O’ and ‘1’ at a time when the commercial production of garden gauge live steam models was in it’s infancy.

For over a decade, Argyle has supported and represented Accucraft products throughout Australia and New Zealand and cooperates with Accucraft in design and development work. Our most recent efforts have culminated in the production of the Victorian Railways narrow gauge 2-6-2T ‘NA’ class “Puffing Billy” which is about to be released.  The formation of ‘Accucraft Australia’ has been a natural progression and a solidification of the partnership established over many years of working together.”

We look forward to working closely with Michael and his team and wish them the best of luck in a growing market. We feel sure that the NA Class will come to be regarded as the benchmark for accuracy and quality in Australian outline models.

With the imminent arrival of the much awaited ‘NA’ class Puffing Billy model, Accucraft (Australia) has announced their first venture into 1:32 scale main line steam with a model of the NSW Government Railways Streamlined C38 Class ‘3801’ on 45mm gauge, Australia’s best known and most widely travelled standard gauge steam locomotive. This streamlined locomotive was designed to haul express trains such as the ‘Newcastle Flyer’ and ‘Melbourne Limited’ for the New South Wales Government Railways. Built in 1943 by Clyde Engineering, No. 3801 was the first of the ‘38’ class locomotives. The impressive service provided by this class of locomotive was enhanced when No. 3801 achieved the fastest journey from Sydney to Newcastle by rail (2 hours 1 minute 51 seconds) for a non-stop run on the 28th June 1964. 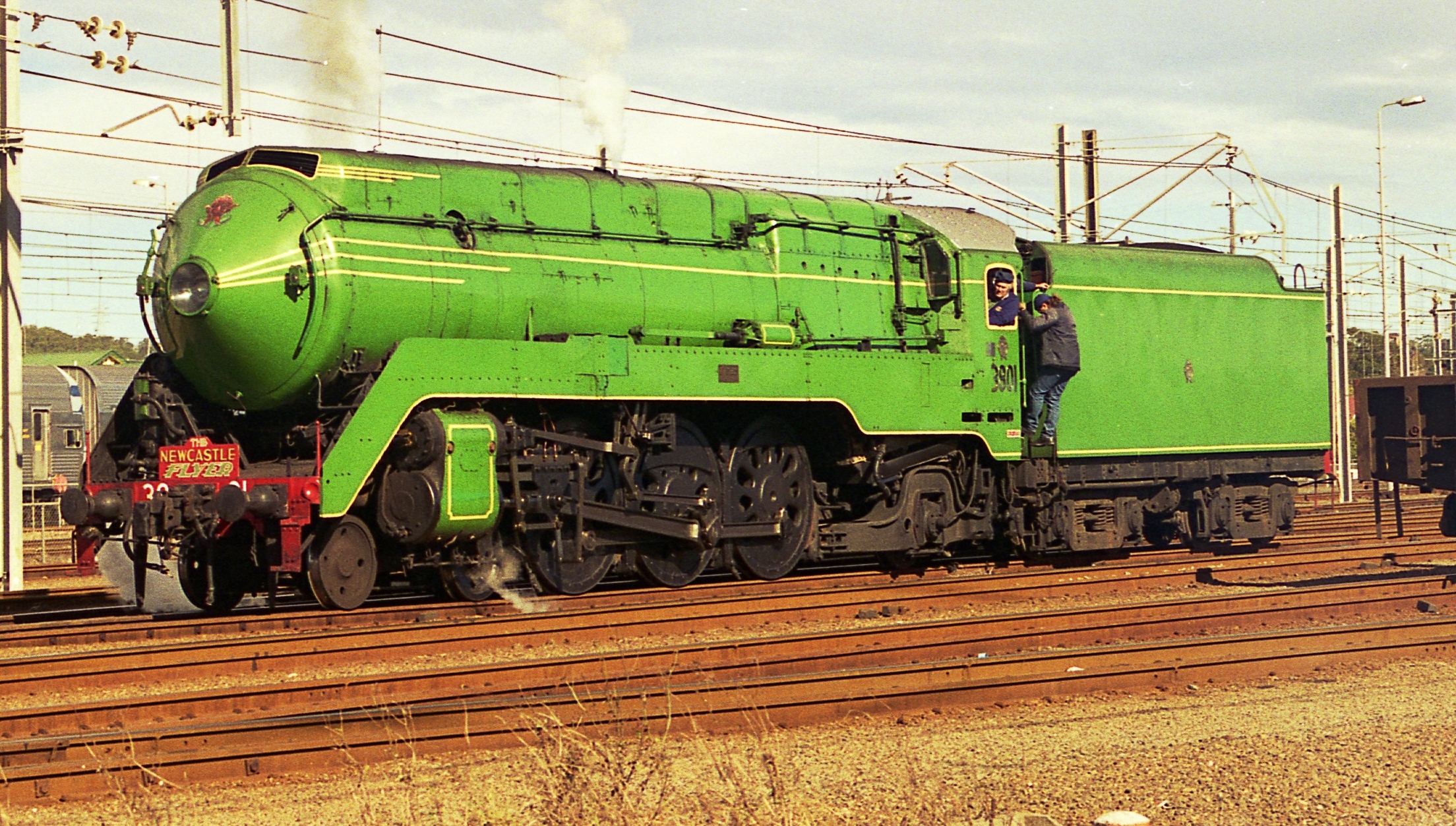 No. 3801 was the first steam locomotive to cross the continent of Australia when it hauled the ‘Western Endeavour’ special train from Sydney to Perth in 1970.

Also from Accucraft (Australia), to be offered as a set of Motor and Trailer (as pictured) with extra trailers available separately. Live steam, 1:32 Scale, 45mm gauge. This attractive set will make a welcome addition to the Gauge One model fraternity offering an appealing balance to the much larger models normally associated with the scale. Pilot Model 2015 – UK RRP TBA. 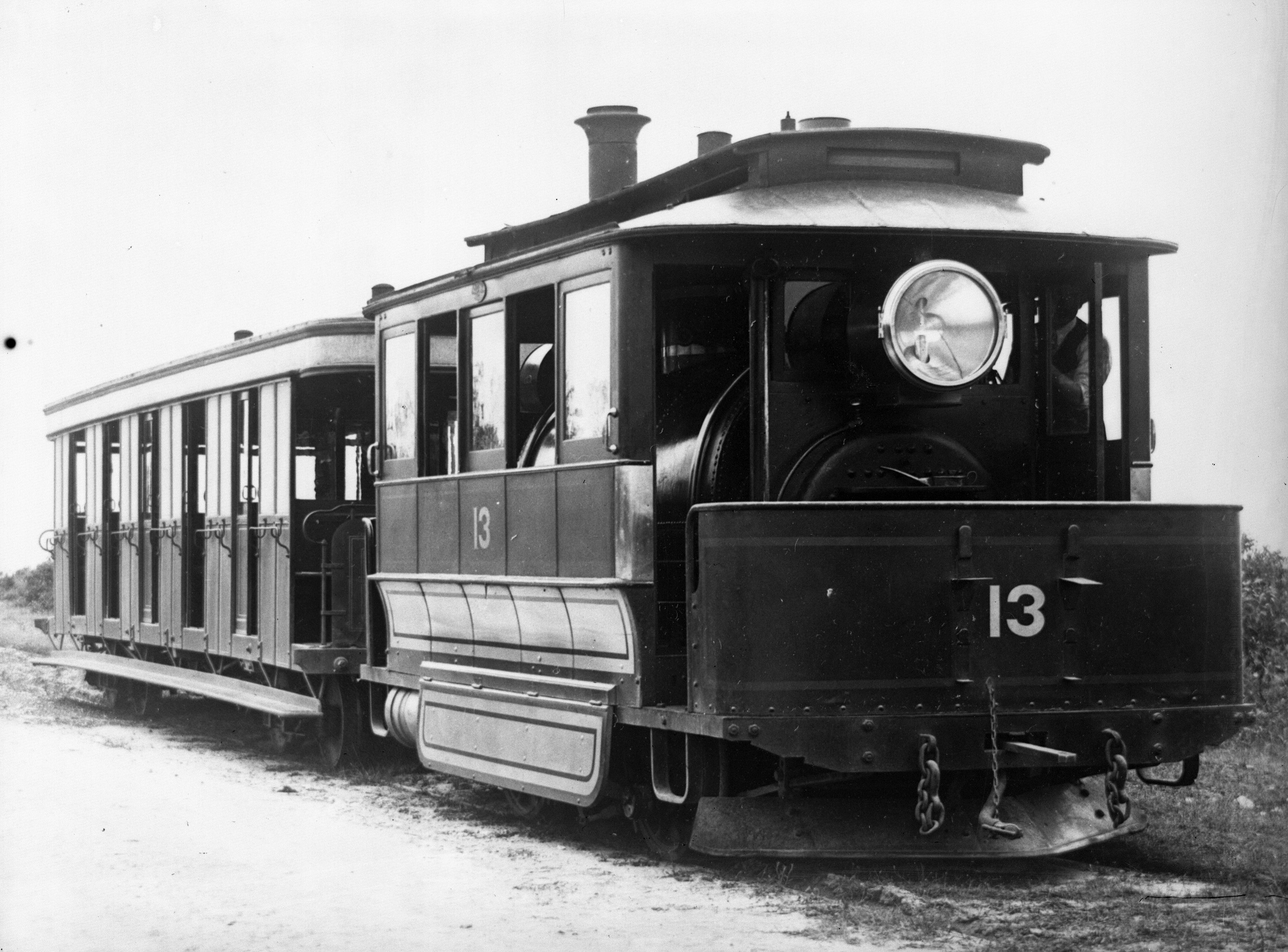 Steam trams were introduced to Sydney as a temporary transport for the International Exhibition of 1879. The steam tram motor is basically a small enclosed saddle tank locomotive steam motor with four driving wheels in an 0-4-0 arrangement. A wooden cab encloses the entire locomotive, which features five windows along each side. Access to the cab is through doors from either the front or back platform. Steam Tram Motor No. 103a, (1891) is preserved and operates a regular public service at the Valley Heights Steam Tramway west of Sydney.

Following the success of their coal-fired K-28, Accucraft (US) are producing a limited run of the attractive little C-25.   The locomotive originally existed as # 103 of the Crystal River Railroad, a narrow gauge line located in the Elk Mountains of central Colorado. It was built in 1903 as C/N 21757 of the Baldwin Locomotive Works, had 33” drivers, 18×20” cylinders, and a tractive effort just short of 25,000 pounds. It was a standard Baldwin design, and other narrow gauge locos of this size and type were built for railroads in the Western Hemisphere.

The C-25 was affectionately known as the “Baby Mudhen” because its pulling power was close to that of the K-27 class, those engines being known as “Mudhens.” The 375 when it was put into service in 1916 was the best steamer on the railroad at that time. Sadly, on June 21, 1949 the one and only C-25 on the D&RGW was scrapped at Alamosa, Colorado.  The model features coal-firing, two cylinders, D-valves, simulated Stevenson valve gear, safety valve, lubricator and is R/C ready (gas-fired model illustrated).  UK RRP £5150.00, due Q1 2015.