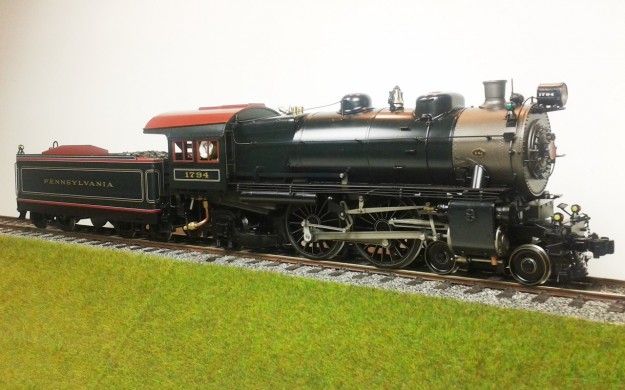 The E-6 class were the last 4-4-2 ‘Atlantic’ type locomotives built by the Pennsylvania Railroad. A total of 83 were constructed between 1910 and 1914. These modern design Atlantics featured a large and free-steaming boiler, outside Walschaerts valve gear, piston valves on the cylinders, and a cast steel KW pattern trailing truck designed by the PRR’s Chief Mechanical Engineer, William F, Keisel Jr. Although replaced by larger K-4 class Pacifics on most top-rated trains, the E-6s remained popular on lesser services, especially commuter operations around the New Jersey seashore routes. Nine were transferred to the Pennsylvania-Reading Seashore Lines; some were also leased to PRR subsidiary Long Island Rail Road.

One example, #460, has been preserved in recognition of the role it played in delivering newsreel footage of Charles Lindburgh receiving The Distinguished Flying Cross from President Coolidge following the former’s epic trans-Atlantic flight in 1927.  The specially chartered PRR train (with its own darkroom) delivered the footage to New York cinemas a full hour before the reels that had been flown there.

Made of brass, stainless steel and copper, the model will faithfully reproduce the impressive characteristics found on these big 80” derived Atlantics. The UK RRP for the live steam version will be £3700.00 for the lined green version, £3500.00 for the black examples including shipping, VAT and UK warranty.

Posted on Wednesday, 18th May 2016 by Accucraft UK Ltd
Bookmark the permalink.