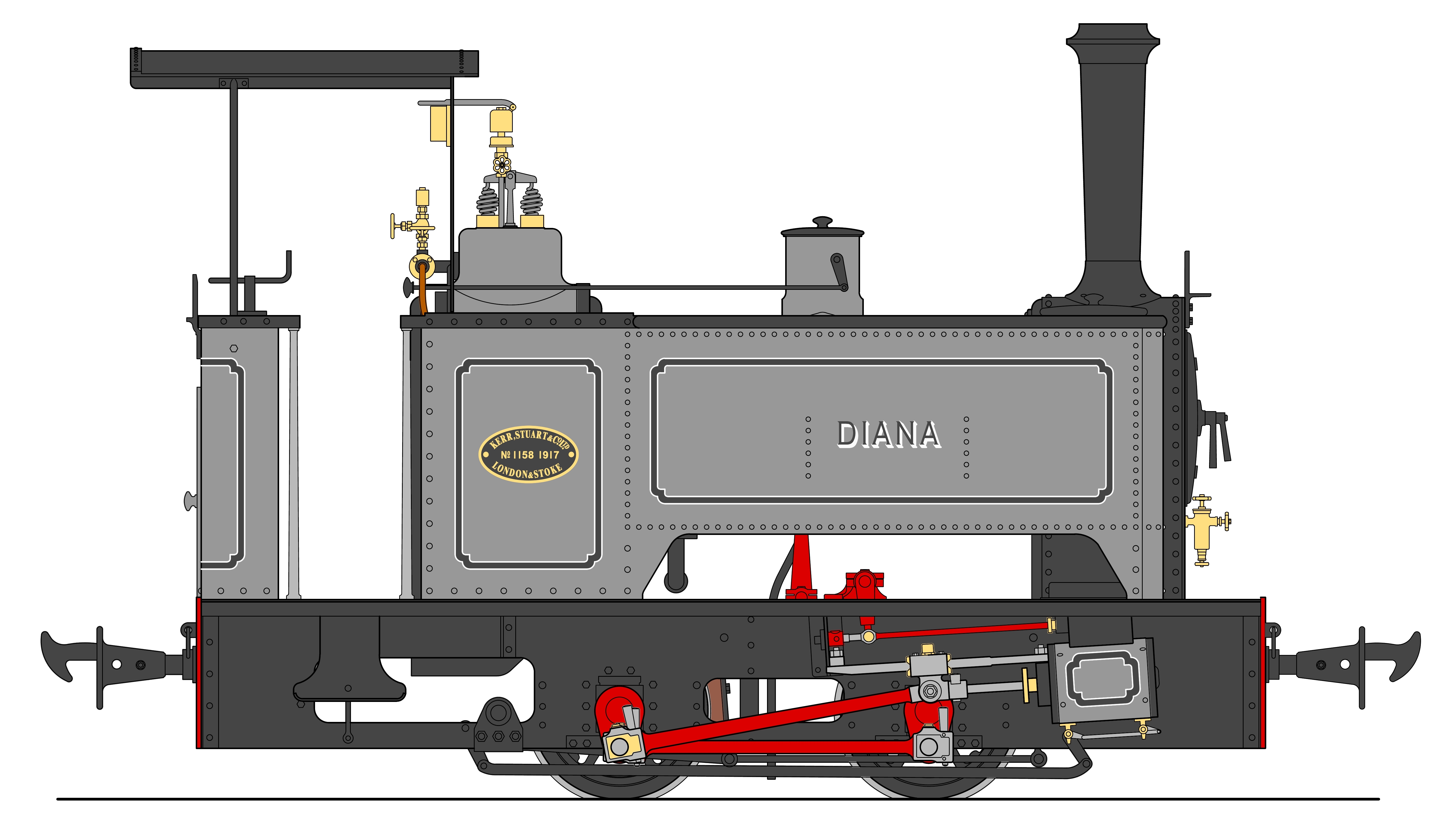 We are delighted to announce a new 7/8ths” locomotive for 2021.  Through the good offices of Diana’s owner, Phil Mason, and with the help of David Fletcher, we can reveal that the next new locomotive in this scale will be a model of the delightful Kerr Stuart ‘Sirdar’ 0-4-0T Diana.  Although there were other members of this class we will focus on the history of this unique survivor.

Diana was built in 1909 by Kerr Stuart as part of an order for six 2′ 5 1⁄2″ gauge locomotives for Mauritius. Although several of the locomotives in the order were sent to Mauritius, Diana wasn’t delivered and stayed at Kerr Stuart’s factory in Stoke on Trent. In 1917, the locomotive was purchased by the Home Grown Timber Committee of the Board of Trade for use on the Kerry Tramway, near Newtown, Powys in Mid Wales. It was rebuilt to 2′ gauge and delivered to Kerry, Powys.

The Kerry Tramway closed in 1922, though a short length was retained and worked by an unknown locomotive. In 1925, Diana was sold to the Oakeley Quarry in Blaenau Ffestiniog, where it worked for the next twenty years. In 1945, it was sold on to the Pen-yr-Orsedd Quarry in the Nantlle Valley, where it and worked until its boiler was condemned in 1950.

Diana was purchased for preservation in 1964 and passed through the hands of a variety of owners and moved to a number of different locations including the Llanberis Lake Railway, the Brecon Mountain Railway and Alan Keef’s in Ross on Wye although its restoration was never fully completed until it passed into the hands of Phil Mason, a Talyllyn Railway volunteer, who finished the work at the Vale of Rheidol Railway before setting the engine to work on the Bala Lake Railway.

The planned release of our model was pushed back six months by the Covid-19 outbreak but we anticipate a 2021 delivery. The model is gas-fired and fitted with a water top up valve, water gauge, miniature pressure gauge and lubricator; constructed of stainless steel and etched brass with a copper boiler, the locomotive has an enhanced level of detail made possible by this scale including a brake stand / gas control valve, dummy water gauges and sliding cab-sheet doors.  It is gauge-adjustable between 45mm and 32mm gauges.  The gas tank is concealed in the left hand side tank with the filler hidden under a dummy coal load, the Goodall top-up valve is hidden in the dummy sand pot on the boiler.  The estimated UK pre-order is £1695.00 and the model will be available direct from us or through our dealers.  Our thanks to Phil Mason for giving us unlimited access to the locomotive and David Fletcher for producing the superb drawings.

In addition to the help Phil Mason has given us he has very kindly arranged that every customer who purchases a model of Diana will be entitled to a free footplate ride on the prototype locomotive at the Amerton Railway near Stafford (subject to terms and conditions yet to be finalised) and the opportunity to pose their model with the real thing!  A numbered certificate confirming this will be issued with every model sold.