May we wish everyone a Happy Christmas and pleasant New Year.  This month we bring you news of our new 1:19 scale locomotive, Dolgoch, for 2019, the arrival of Mona, our contribution to the War Office Locomotive Trust and raising funds for Peter at Amberley.  We are also listing some end of season bargains to be had, just before Christmas!

In 2013 we were approached to produce all the Talyllyn Railway locomotives as a commission and although this never came to fruition we had worked up the concepts and designs with a view to producing them of our own accord.  Due to developments within the trade we have decided that, rather than waste all this effort, we would bring the first of these, Dolgoch, to the market in 2019.

Dolgoch was built by Fletcher, Jennings & Co. in 1866 and is one of the oldest locomotives still in active service.  The locomotive was renamed Pretoria between about 1900 and 1914 in celebration of the relief of that township in South Africa by Lord Roberts during the Boer War. In early 1945, Dolgoch was sent to the Atlas Foundry in Shrewsbury to be overhauled. At this time, the railway’s only other locomotive Talyllyn was so worn out it could not be safely operated and services on the railway were suspended. Dolgoch returned to service in September 1945. Dolgoch was the only operable locomotive from 1945 until 1952, when Edward Thomas was restored for use.  Between 1954 and 1963, the locomotive underwent a major overhaul.  Dolgoch returned to service in late 1999 after a further overhaul involving firebox repairs and an extensive mechanical overhaul, including the fitting of air braking equipment, the last Talyllyn steam loco to be so equipped.  After receiving a new boiler in 2011, it ran in Crimson Lake livery until 2015 when along with its sister locomotive Talyllyn it was repainted in ‘Indian Red’ livery.

A percentage of the retail profit from each sale will be donated to the Talyllyn Railway for the future overhaul of Dolgoch, a higher percentage if the model is bought direct from Accucraft UK Ltd.  We would like to acknowledge the help we have received from Talyllyn Railway members in preparing the drawings for this model.  Photo courtesy of Geoff Loynes. 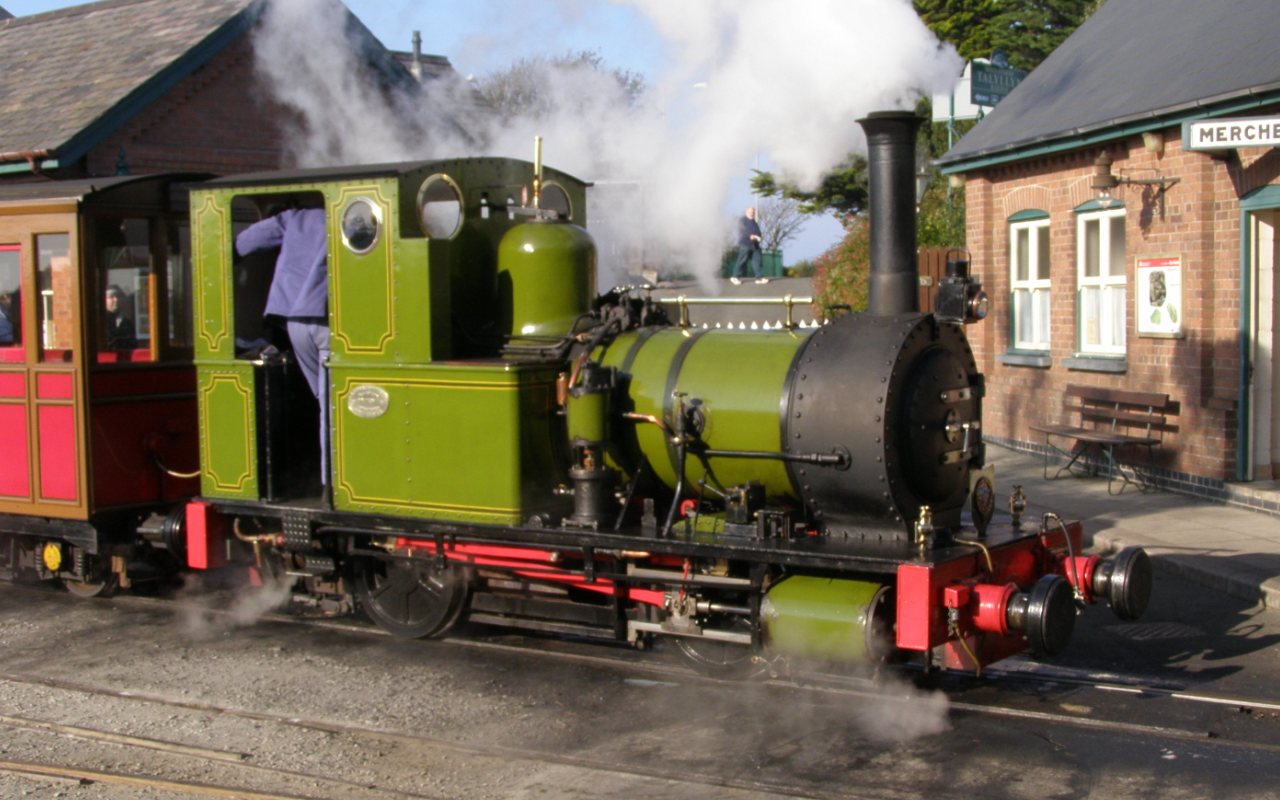 The model is built to a scale of 16mm:1′ (1:19 scale) and follows our standard design brief being internally gas-fired with a centre flue boiler. The model will not be gauge adjustable but will be available in either 32mm (‘O’ gauge) or 45mm (‘1′ gauge) and will not have insulated wheels. The axles run in bronze bearings and all the rods and valve gear (simplified Stephenson) will be manufactured from stainless steel.  The cab roof flips up and over sideways to give access to the gas and water, the lubricator filler will be in one of the bunkers. The copper boiler is fitted with a gauge glass (with blow down) and the displacement lubricator has an under-floor drain valve.  The model is built from stainless steel and brass. The model will be available in TR green, ‘Atlas Foundry’ green or red.  UK RRP £1550.00, due for delivery Q2/Q3 2019

You can find full details of the model here.

Last call for the Isle of Man!

Mona is due for delivery shortly.  We have now produced a fair cross-section of Isle of Man 2-4-0Ts and Mona is likely to be the last one we make.  All the Indian Red ones are pre-sold (both live steam and electric) and there aren’t many Ailsa Green ones unspoken for so don’t miss out!  This really is the last call for the Isle of Man 2-4-0T! 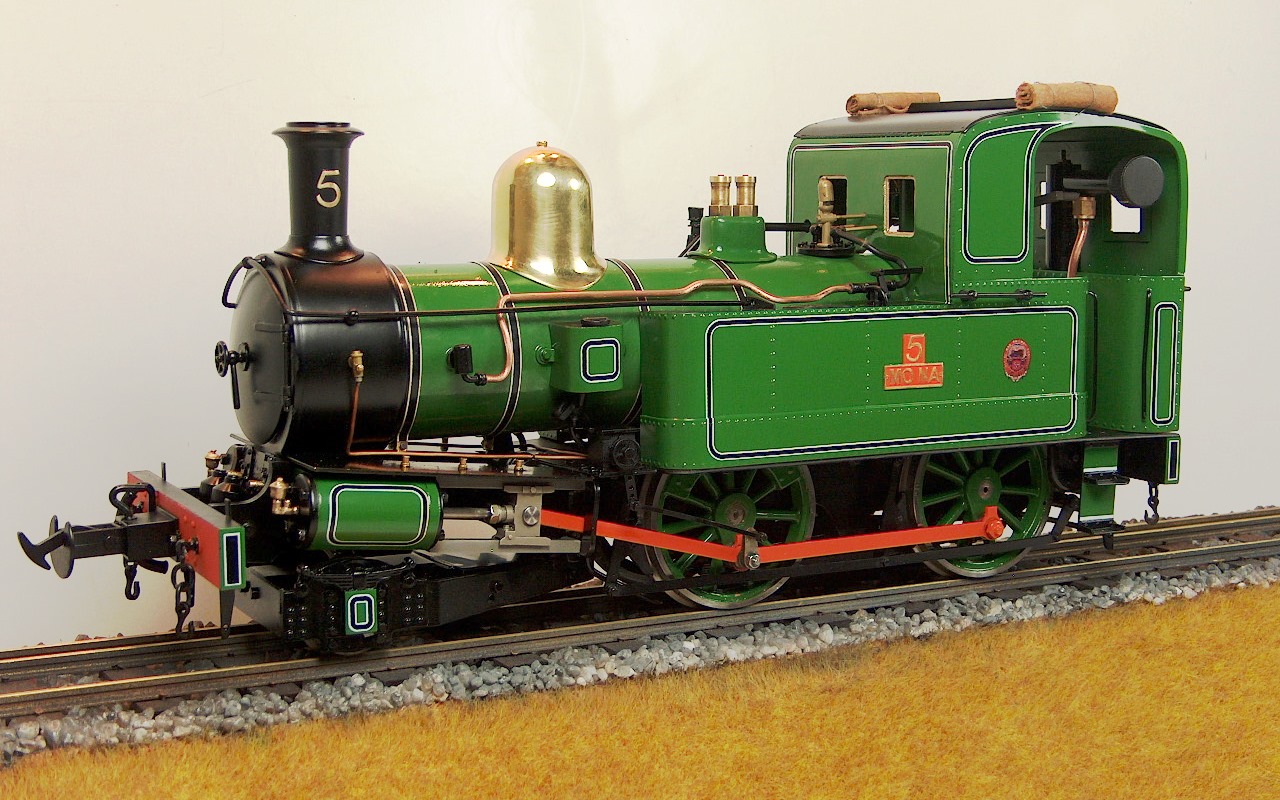 Our ‘museum quality’ 1:19 scale locomotive for 2018 was the WD Hunslet 4-6-0T and we are pleased to say the model proved enormously popular.  Having worked with the Trust to produce such an accurate model it was only appropriate that we gave a little something back and at the Warley exhibition in November (where No. 1215/303 was on show), Graham Langer, Managing Director of Accucraft UK Ltd., was delighted to hand over a cheque for £3000 to Ian Hughes, the prime mover behind the locomotive’s repatriation from Australia.

Speaking beside the prototype, Graham Langer said, “Accucraft has a long tradition of working with the preservation movement, having previously supported all three ‘Tracks to the Trenches’ WW1 events, the construction of ‘new builds’ Lyd, Lyn and Tornado and a host of smaller projects; we were happy to be able to contribute to the restoration of No. 303 and are grateful to all those who bought the scale model and thus supported our efforts.”

Ian Hughes responded, saying, “With the final bills from the rebuild only recently cleared, this donation is very well timed and much appreciated, it makes a great start on building up funds in case of any maintenance issues and also to create a reserve for 10 years’ time when the next boiler overhaul becomes due. For this we thank not only Graham and Accucraft but all those who have supported us by purchasing one of these incredibly detailed models that really capture the feel of the original.” 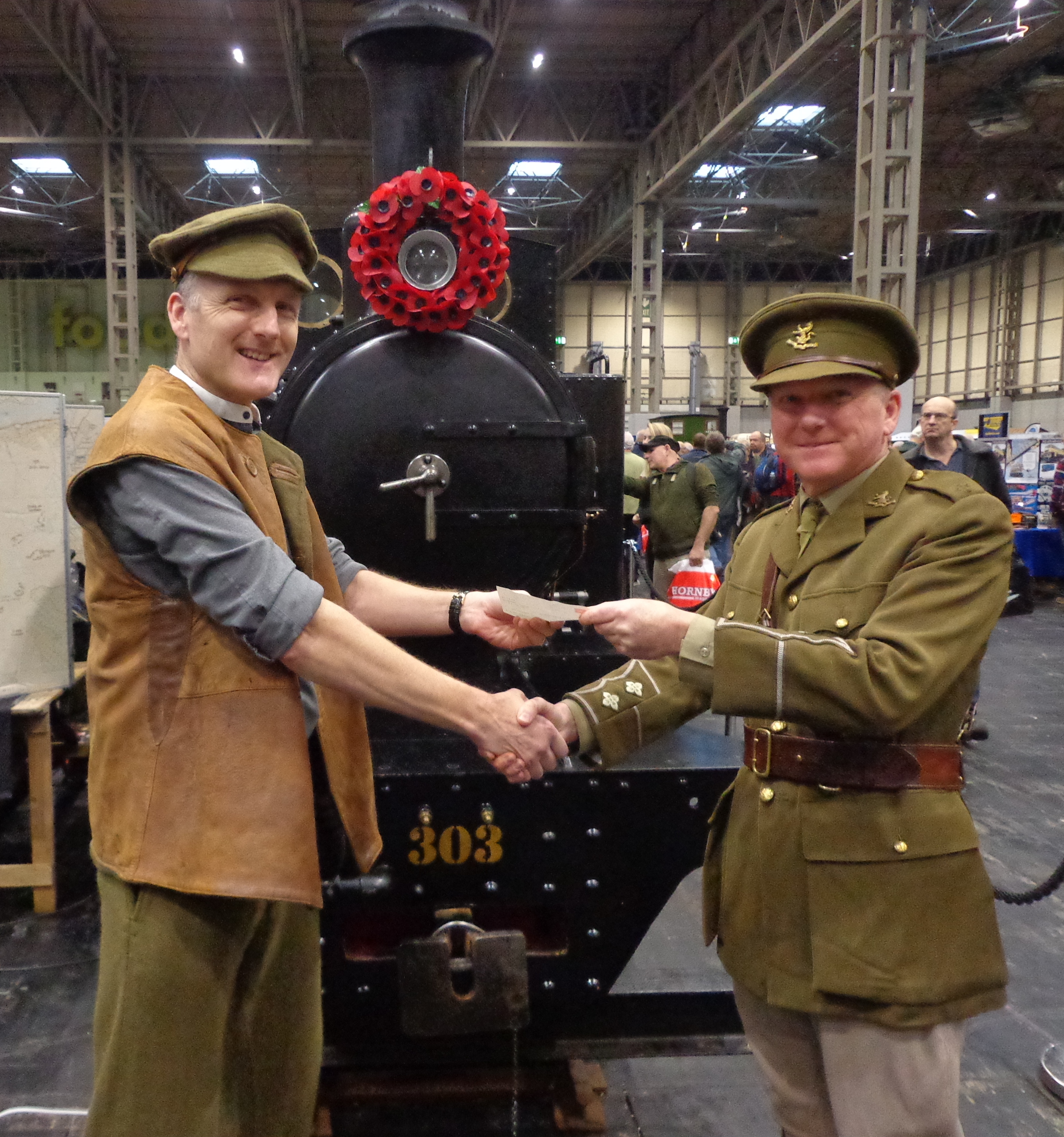 “A Bagnall for a Bagnall” – We have donated a rather unique variant of our 7/8ths” Scale Bagnall saddle tank to Amberley Museum in West Sussex.  The museum is raising funds to restore Peter, a cabless version of our model so we thought we’d see what ours looked like in the same condition.

Peter was originally commissioned by the war office for forestry operations in Cumbria, then after several owners was purchased by the Cliffe Hill Quarry, Leicestershire in 1922, where it is believed that Peter was named after the owner’s son.  In 1954 Peter was acquired by the Narrow Gauge Railway Society and eventually joined the Brockham collection in 1965. Peter was moved to Amberley in 1982 and after a lengthy restoration project led by Doug Bentley and members of the Amberley rail group, Peter became operational at the museum in 1994.

To this day Peter has been a hugely popular attraction for young and old alike, pulling the Santa Express at Christmas, giving mums and dads a once in a lifetime opportunity to drive a steam engine on Mothering Sunday and Father’s Day; as well as running at many of our major events.

The time has now come when Peter is in need of boiler repairs and a full service, with costs expected to reach up to £40,000. The museum has started a Peter restoration fundraising campaign, and has already received donations from Cliffe Hill Quarry and the Narrow Gauge Society.  If you’d like to bid for this unique Accucraft locomotive (which will be supplied with the original cab and chimney should the new owner wish to re-fit them), just download the sealed bid auction form here and return it to Amberley Museum. 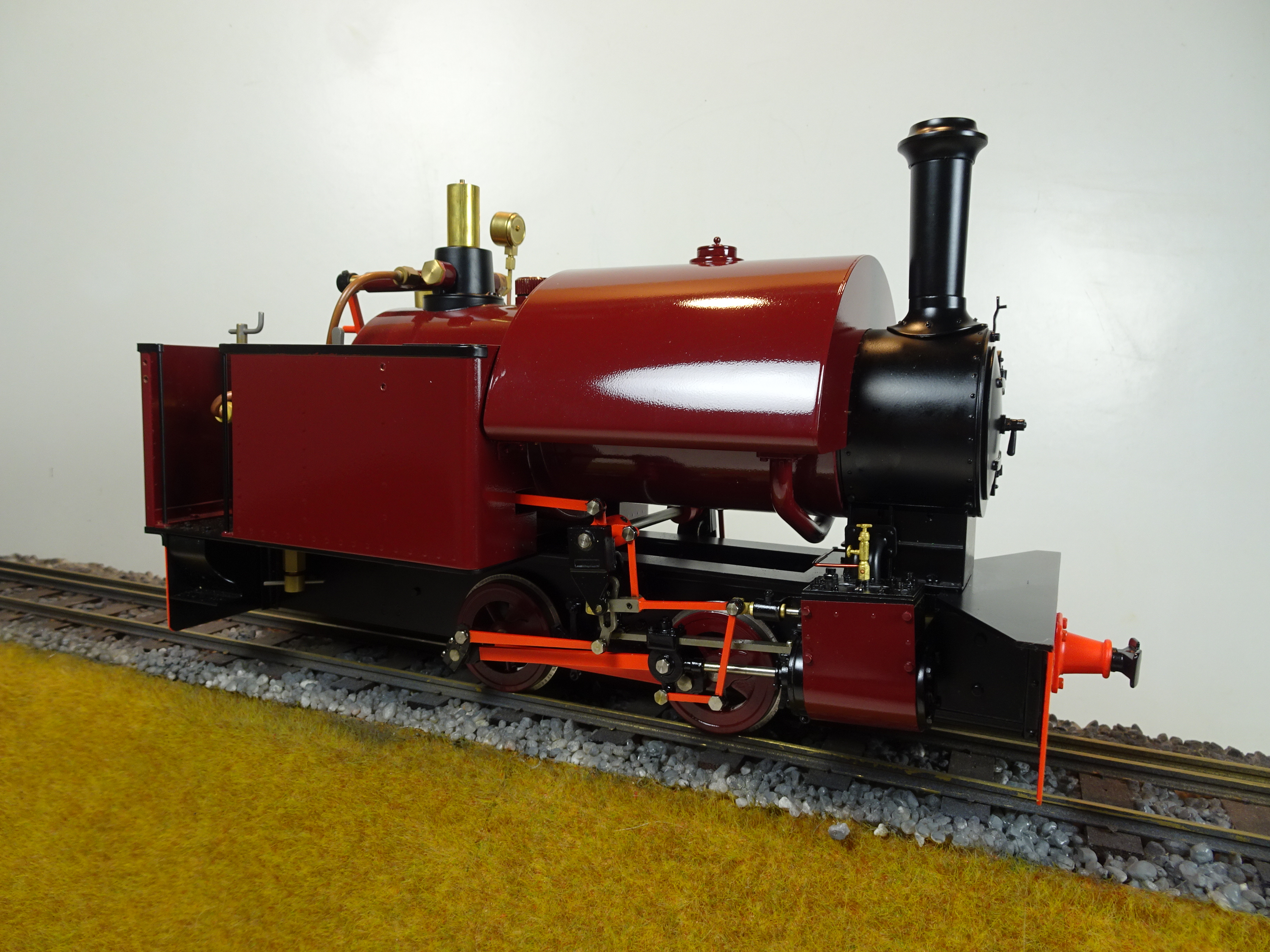 We still have some bargains left if you missed out this summer so email us or ring us if you would like any of the following items:

We also have a number of repaired Mk1 coaches (they had loose interiors) available for £225.00, mainly SOs and FKs – please enquire about availability.

* The four RCH wagons will be your choice of four different types of ‘Big Four’ or BR liveries – £300.00 worth of wagons free if you buy a ‘Victory’!