Accucraft, the UK’s leading producer of small-scale live-steam engines, and The A1 Steam Locomotive Trust, builder and operator of Britain’s newest main line steam locomotive, are delighted to announce the production of a live steam, Gauge 1, model of Tornado. Constructed over a twenty year period, the prototype has written a new chapter in the annals of British steam, becoming the first main line steam locomotive to be built since 1960. Since making her first moves in 2008, Tornado has hauled the Royal Train three times, appeared on the BBC’s Top Gear programme and run tens of thousands of miles on rail tours and preserved lines. 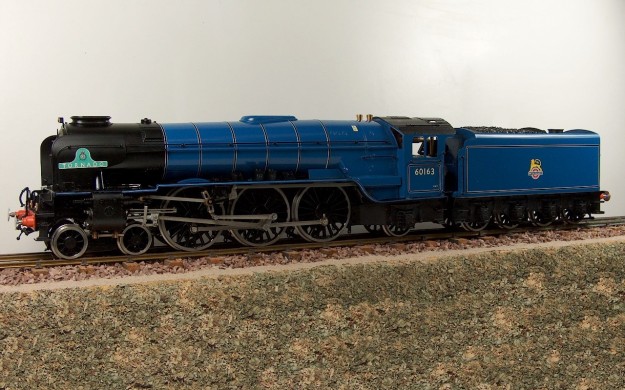 Accucraft’s model faithfully captures the elegance and power of the Peppercorn class A1 design and features all the unique details carried by Tornado. The model is gas-fired with slide valves and has all the equipment the Gauge 1 fraternity has come to expect from an Accucraft locomotive. The cylinders are fitted with drain cocks. The chassis is constructed from stainless steel. The boiler is copper, the cab and tender are constructed from etched brass. The UK RRP will be £2895.00 with a release date of 2014 and the model will be available in apple green, BR blue and BR green. The images shown here are of the engineering sample. The retail profit from sales of this superb model will go to The A1 Steam Locomotive Trust to complete the financing of Tornado herself.

Graham Langer, general manager of Accucraft UK and a member of the A1 Trust, said, “It has been a joy to work with the Trust producing a faithful replica of Tornado, sales of which will help raise funds for the full-size locomotive.” Speaking of behalf of the Trust Mark Allatt enthused, “Just as Tornado has brought pleasure to countless numbers of steam enthusiasts we hope that this wonderful miniature Tornado will do the same

The model will be available from the A1 Steam Trust, Accucraft UK and selected retailers.  You can see the full details of the locomotive here.