We would like to remind you that we will be attending this year’s National Garden Railway Show in Peterborough on 12th April and look forward to seeing as many of you there as possible.  As ever we will be bringing a good selection of our products and possibly springing one or two surprises!  In addition we are sponsoring the centre piece of the show, Julian Birley’s Quarry Hunslet ‘Alice’ and a rake of slate wagons; Julian will also be bringing Ivo Peters’ Bentley.  You can see full details of the show here. 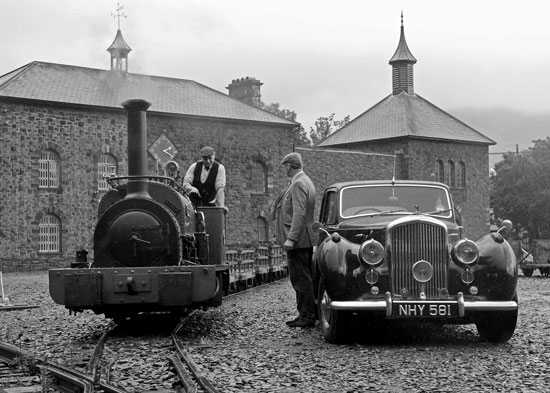 Accucraft (US) Canadian Pacific Royal Hudson – only a handful left!

Designed by Henry Bowen and introduced in 1937, the semi-streamlined Hudson was selected to haul the 1939 Royal Train that carried King George VI and Queen Elizabeth on their journey across Canada. No 2850 was chosen and was turned out in a spectacular Royal blue and stainless steel livery to match the 12-coach blue and silver train.  So impressive was 2850’s performance on the 3224mile trip that Canadian Pacific applied to Buckingham Palace for permission to officially designate the class as Royal Hudsons, a request that was granted. Subsequently all 45 members of the class carried a cast Royal Crown on their front running board skirts.

Although designed as express passenger engines and capable of over 90mph, the Royal Hudsons were also used extensively on freight duties, but it was on the prestigious passenger trains such as the daily Dominion that they made a name for themselves with 1250 mile runs between Calgary and Ft William (Thunder Bay). On the cross-country runs it was common to have several express reefers at the head end between the engine and baggage car.  The Royal Hudsons ran in service right upto the withdraw of steam by Canadian Pacific in the summer of 1960 when most of the class were scrapped. Happily four have survived to this day in preservation, including No. 2860 currently in steam in British Columbia.  No. 2850 is preserved in its Tuscan and grey livery and has pride of place at the Canadian Railway Museum at Delson just Outside Montreal.

The highly detailed Accucraft model is still available for an astonishing £3595.00 from your local retailer and would grace any Gauge 1 line.  You can see full details here or enjoy watching video footage of one in action:

Accucraft (US) has separated the Accucraft Trains and American Mainline Websites as part of creating a ‘stand alone’ brand for the 1:29 Scale range.  You can find the new AML website here.  As of 1st April we will be working from revised U.S. price lists, links to which can be found below.