Two dates for your diary this month!  Firstly on Saturday March 17th and Sunday the 18th there is the Midlands Garden Railway Show at the Warwickshire Exhibition Centre on the Fosse Way.  We’ll be attending this large scale model railway show and look forward to seeing you there – more details can be found here.  Then at the end of the month there is the annual 16mm Scale Association National Garden Railway Show at Peterborough; running for one day on the Saturday 31st March, we’ll be attending and awarding prizes for the Accucraft power unit competition at 11.00am, the entries for which can be seen here.  More details of the 16mm show can be found here.

By a piece of profound good luck, the day we went to Boston Lodge to present our ‘Lew’ to ‘Lyd’ the Ffestiniog Railway was steaming the Quarry Hunslet ‘Hugh Napier’ for the first time in nearly sixty years. ‘Hugh Napier’ worked at Penrhyn Quarries, where it was part of the ‘Large Quarry’ class on which we are basing our 7/8ths model. The loco had been part of the collection at Penrhyn Castle since 1966 and has been the subject of a long-term effort to return it to working order. In July 2011, the locomotive and its new boiler were transported to Boston Lodge Works for restoration to working order after which it will become a roving ambassador for the National Trust, visiting locations around the UK. Our model will be available in two colours, plain red or plain black! The initial batch is almost completely spoken for so if you want one this year we suggest you contact your local retailer. 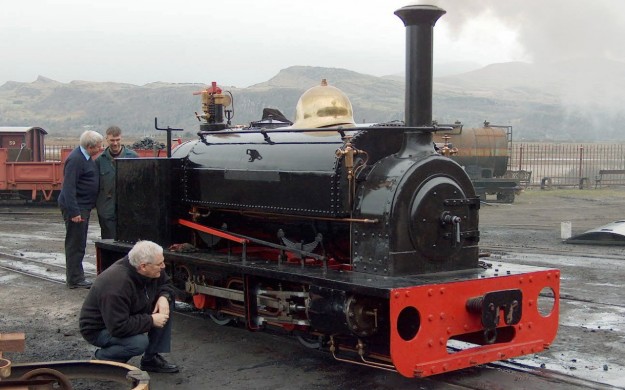 Ian Pearse gets down with ‘Hugh Napier’ at Boston Lodge Works

We now have the first image of the pre-production model of Denver & Rio Grande Western #375, the “Baby Mudhen” as it was known by engineers on that line.  Built in 1903, No. 375 started life as Crystal River RR #432 before being absorbed and rebuilt by the D&RGW in 1916.  Although the loco was unique on that railroad, the class was a standard Baldwin design and as such was supplied to many other 3′ and metre gauge railways around the world, so it would be ideal for any freelance short line. The model carries a UK RRP of £3430.00 for the live steam version and £2850.00 for the electric model, available for pre-order through your local retailer. You can see more of the live steam loco here and the electric version here.